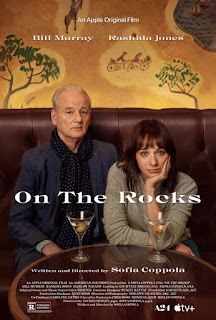 On the Rocks succeeds like Sofia Coppola’s films usually do; they are well composed with fine actors, music, and cinematography.  They are also low-key, although excitement does build here with the detective elements and fine locations spicing things up.  Even though it is somewhat predictable, it is enjoyable and would make a fine date movie.

Laura (Jones) is a writer and young housewife whose young children occupy a good deal of her time.  Her husband Dean (Wayans) is often away from home, trying to build up a new company that has a lot of promise.  They seem very happy together, but when a couple of odd things happen, Laura confides in her father (Murray), a debonair art dealer who seems to engage every woman he meets in whatever circumstance—even ordering a meal at a restaurant.  Not only that, he is a world traveler and has made contacts everywhere he goes, from concierges to wealthy prospective and past clients.  He’s a lesson in making sure one keeps track of and remembers everyone crossing his path. Even when he is stopped by a traffic policeman in his red sports car, this information comes in handy.

When Laura talks to her father about the “odd things” happening, in his response, as well as his philosophy about men and life, we see a tinge of self-projection in his perceptions, and that becomes part of the mystery of the film. As he drags his daughter around to all kinds of luxurious settings, we’re like Laura in wondering where reality ends and fantasy begins.  But whereas we can enjoy the experiences, she is usually on edge and in doubt.

Rashida Jones portrays the young woman very well; indicating the sense of responsibility that Laura grew up attaining, but not having fully developed a sense of self-worth and confidence that would tide her over in writing blocks and questions of trust.  Murray plays his role like the pro he is with the ability to charm/wheedle/reason his way through any situation while still listening attentively to another point of view. Marlon Wayans does an excellent job in portraying a husband mostly oblivious to the emotional turmoil around him, but clearly having a zest for life.  His good looks and affability feed into the possibility that he has other things on the side.

I loved the insertion (for comedic relief, I guess) of the Jenny Slate character, Vanessa.  She serves essentially as a stand-up comedian capturing Laura in the line to take their kids into school, pressure-talking about her own interests without regard to anyone else, even her own children, who seem to be an after-thought.  I figure that’s an experience everyone will recognize.

Additional aspects of the film that are impressive include the musical score by Phoenix, always capturing the mood, and the cinematography by Philippe Le Sourd. Some of Le Sourd’s urban images—especially at night—reflect thrilling creativity.  Also, the mixing up of the races within a family was refreshing to see.

An enjoyable escapist film for ones isolated during these trying times.