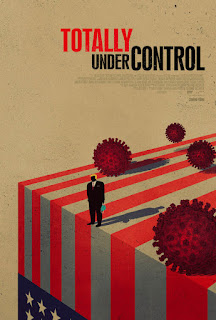 The title is taken from President Trump who repeatedly claimed that the COVID pandemic was totally under control during January, February, and March of this year; when, in fact, it was raging to the point that so far over 200,000 U.S. citizens have died from it and over 30 million jobs have been lost.  Alex Gibney, famed documentarian (Scientology and the Prison of Belief; The Story of Wikileaks; Enron:  The Smartest Guys in the Room; The Rise and Fall of Eliot Spitzer; Casino Jack and the United States of Money; Taxi to the Dark Side; Citizen K) with his co-directors Ophelia  Harutyunyan and Suzanne Hillinger, gives a detailed account of an important issue; in this case, the COVID pandemic in the United States this year, and how President Trump and his administration have handled it. It’s a very sad story that may usher in a period when our status in the world is different from any the United States has ever known.

We’re introduced to the many government officials and scientists trying their best, along with those putting in stumbling blocks every step of the way. Most of what comes through is that the people with experience in infectious disease and public health are continually undermined by those with no experience in either area and, sometimes sincerely and sometimes disingenuously, negate what is recommended.

There are a multitude of instances put forth about events during the pandemic, which make it complicated, but the central theme is one pitting concern about public health against economic interests and the power of the Presidency to orchestrate policy.  Overall, it shows how the absence of good leadership undermined all the efforts made to combat the pandemic, from denying the seriousness of the illness to the states being put into a competition with one another—and with the Federal government(!)—to secure health supplies.

It’s a sad story in many ways, in that a comprehensive plan for what to do to prepare for a pandemic was begun under President Bush and was passed on through the years to subsequent administrations.  President Obama used it to ward off the H1N1 flu outbreak, and his administration passed on to the Trump administration a warning about the possibility of a pandemic and gave Trump the 69-page playbook about what to do if one hit.  Unfortunately, the plan was chucked, and sometime later the Global Health Security, considered an elite biodefense team within the Nationall Security Council, was disbanded.

The filmmakers have done an excellent job in recruiting scientists, journalists, and government officials here and abroad, to provide a detailed summary of how the pandemic has been managed in the U.S.  What happened here in just the first half of 2020 is in sharp contrast with South Korea, a country where their first case of COVID19 occurred at the same time as ours.  But the South Korean politicians put their scientists in charge of managing the pandemic, emphasizing the importance of comprehensive testing and tracking, isolation measures, and amassing a store of medical equipment that has met their needs.  Consequently, they have not had to shut down societal organizations, and their economy has prospered.

Totally Under Control lends comprehensive, authoritative, and accurate information in its account of what happened when a pandemic hit one of the most powerful countries in the world.  It behooves every U.S. citizen to watch it and use it as a guide in evaluating our government leaders—perhaps especially in making decisions before the upcoming national election.

Alex Gibney, master documentarian, nails it again in this account of why the U.S. has been the worst hit of all the nations confronting the COVID pandemic.

Posted by donnarcopeland at 11:49 AM