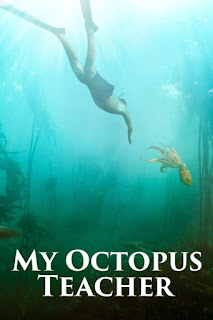 How pleasant it is to spend time under the water, seeing all the exotic creatures and being gently rocked by the view expertly captured by Roger Horrocks, Craig Foster’s narrating voice, and the gentle music of Kevin Smuts.  This is a work of both art and of craft in its consolidation of all the elements it took to create a documentary that keeps the viewer’s attention glued to the screen—all with a sense of serenity and peace.

I’m not proud to say that I’m not much of a nature lover, but the way the movie pulled me in is a testament to the filmmakers’ skill.  Craig Foster presents a detailed account of his bonding with an octopus during the span of over 300 days, astutely observing it at first, and then when he learns how, actually developing a relationship with it—with her, I should say, because she does eventually become an individual with a personality, even to us.

We learn that ocotopi off the western cape of South Africa make their home in kelp forests where they have ingenious ways of protecting themselves from predators like the pajama shark by covering themselves with kelp leaves and even sea shells, hiding in small cracks, and using other creative ways to elude the shark’s jaws.  But beyond that, they appear to have the capacity of exploring a stranger in the water—a human—and then after determining it is safe, showing human-like attachment, looking for him each day and ending up resting on his hand at first and later his torso to be carried up to the surface.  For survival, the arms of the octopus—site of their cognition—aid in capturing food, as well as being useful in devising different kinds of disguises.

As noted by Craig Foster, there is so much to learn from the natural world, and his spending over 300 daily visits to observe one octopus informs us not only about her, but because he is so open, about him.  Apparently, he almost gave up filming the under seas when he bumped into this particular sea creature and observed her daily for almost a year. His account shows how his diligent observation of her was therapeutic for him.  He became more open to others and to his son, who relished exploring with him and developing the same gentleness of spirit that Craig has found for himself.  In short, he came to realize “just how precious wild places are.”

This is a moving production about nature, reminding me of David Attenborough’s many series on the subject.  It inspires and informs us, and skillfully gets us to listen to the important issues facing our planet today.  In watching, we get to observe so many of the strange and wonderful creatures that surround us, all which have valuable lessons for us to learn.

An inspiring, informative account of a relationship that developed with an octopus who begins to seem almost human.