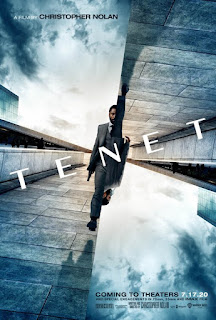 Tenet has all the hallmarks of a blockbuster—established filmmakers, actors, and a riveting story with themes of mind-ripping, intriguing, violence.  It certainly does all that.  What it doesn’t do is give the viewer time to reflect on any current, compelling issues that we should be concerned about nowadays, or probe personal relationships that make them seem to matter.  It’s more of an almost formulaic activation of tropes seen many times before.  This version seems to have been intended to tease us with time travel, frustrated love, and heroic battles between the hero and unrecognized/mysterious adversaries.

The unnamed protagonist (Washington), a CIA agent, is recruited to match wits with a terrorist, Sator (Branagh) intent on destroying the world.  The first task is to actually come in contact with the man, not a direct route.  The Prospect meets Sir Crosby (Caine) for lunch who informs him cryptically about Tenet, a shadow organization attempting to save the whole world from destruction.  The Protagonist will be a part of that effort in his new assignment.  To achieve his task, the Protagonist tries at first to go through the wife of the infamous Russian Oligarch, Andrei Sator, Katherine “Kat)  (Debicki), an art dealer.  But this is with the intrusion of a fellow agent Neil (Pattinson), who appears and re-appears as a helper and, seemingly at times, a foe.

In due time, the protagonist has a clear picture of what he is up against, in terms of arms dealers, their facilitators, and a world-wide plan.

Typical of writer/director Christopher Nolan, he plays around with time; and in this case, time inversion, which the evil Sator is trying to perfect for his own use.  It allows for something dropped to jump back up in one’s hand and cars to travel backwards on busy freeways—lending high-tension moments to the plot, along with well choreographed hand-to-hand combat and mental/physical cruelty.  More thrilling is a reverse bungee jump up the outside of a skyscraper.  (In a filmmaking aside:  The two actors start the jump, then stuntmen take over without a noticeable cut in the frame.

Adding to the excellence in craft, Hoyte van Hoytema’s cinematographic feats maintain breathless action, accompanied by Ludwig Goransson’s always apt score. John David Washington is coming into his own as an actor earning action-figure status.  He mixes the heroic with sincerity and credibility, which adds to his appeal.  The stately Elizabeth Debicki plays Sator’s wounded wife with grace and expressive femininity, using her beautiful eyes to break through her mystique and help make her sympathetic.  Kenneth Branagh succeeds in filling his character with narcissistic loathsomeness making him easy to hate.  Bollywood’s well known star Dimple Kapadia does an admirable job in portraying a complex, woman with power.

For Fans of Christopher Nolan Tenet will likely be satisfying and fun; others, as I did, may find it somewhat tedious to follow and feel impatience at the prolonged combat scenes.

Go on a time-inverted journey in Christopher Nolan’s newest thriller.