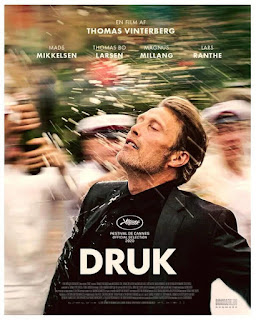 Another Round…as in another round of alcohol. A group of four teachers at a Danish gymnasium going through bouts of alienation—especially one, Martin (Mikkelsen.  The other three, spearheaded by the psychology professor, Nikolaj (Millang), decide to embark on an experiment aimed to get them out of the doldrums.  The hypothesis of this unorthodox study derived from Norwegian psychiatrist Finn Skarderud is that keeping a certain amount of alcohol in the bloodstream will keep the individual energized but relaxed, interesting, and optimally engaged in society.

The four teachers agree to test his theory.  And in the initial stages, the experiment seems to be working admirably.  Martin’s students stop complaining about his lethargy after he demonstrates the success of Winston Churchill and Ernest Hemingway; Nikolai’s students begin to appreciate him more; Peter’s (Ranthe) students sing so much better after he introduces new techniques, and Tommy is showing his soccer team how to play ball better than ever, while protecting the runt of the team.  The experiment seems to have put a shot in the arm of the teachers. However…many experiments can get out of hand, and so, of course, does this one.

Guess what happens when people drink too much?  You guessed it; you’ve seen it many times before.  Which begs the question of what writer/director Thomas Vinterburg (The Hunt) had in mind with this movie.  Optimally, it might be that rationalization for heavy consumption of alcohol is a pitfall; but he doesn’t seem to be saying that, actually.  Is it that heavy consumption is bad for some but not all? Granted, it’s disastrous for one character, but maybe the other three are not doing so bad?  I’m not convinced of this.  What is Vinterburg actually saying?

With the over-use of alcohol across so many countries today, my impression is that Vinterburg’s movie only serves to reinforce the problem.  It’s so tempting to join in when we see liquor made to be something so enticing and just plain fun—and those trying to abstain seen as killjoys.  In my view, all of these main characters could have used a large dose of AA and psychotherapy.  But this is never alluded to during the whole of the film, which robs it of any redeeming quality.

A hard-to-watch film about the downfalls of alcoholism, which don’t seem to be addressed in any meaningful way.

Posted by donnarcopeland at 8:51 AM