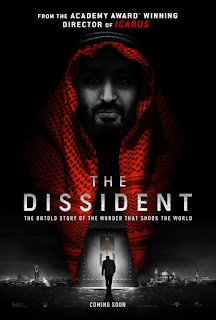 For a long time, Jamal Khashoggi was a highly respected journalist in Saudi Arabia known as “the voice of Saudi media”, one who was very close to the monarchy and considered a spokesman for it.  But while he was a part of that system, he was also a reformist who would eventually be advocating for the country to move toward a more democratic form of government.  As he was going in this direction—about the time of the “Arab Spring” when it looked like a number of countries in the Middle East, specifically Egypt, might be heading there, the monarchy under Crown Prince Mohammed Bin Salmon was consolidating its power in terms of the government, the media, and any would-be challengers to his authority.

The Arab Spring was alarming to Saudi Arabia where rumblings of similar movements were becoming apparent.  As a defense, the Saudis helped change the direction in Egypt by funding the counter-revolutionary movement, effectively maintaining a dictatorship there.

This documentary does a fine job is putting Khashoggi into the context of his time and those understanding and supporting his efforts, in addition to elucidating in more detail the investigations that were attempted following his death.  We hear a lot from Omar Abdulaziz who appears a number of times in the film.  Omar had already had to flee from Saudi Arabia for his Tweets against the monarchy—never being able to contact family or friends again—and encourages Khashoggi to join his group in Canada.  Khashoggi does that, but eventually ends up as a journalist at the Washington Post in D.C.

When he left Saudi Arabia against his will and for the last time, he had to bid farewell to his family, and the Saudi government pressured her to divorce him. Several years later when he was living in the U.S and working at the Post, he had developed a relationship with Hatice Cengiz, a Turkish woman, whom he wanted to marry.  The reason the two of them had gone to the Saudi Consulate in Ankara was to get proof of his divorce, but it was there by all accounts he was brutally killed.

The Dissident presents a well-rounded picture of Khashoggi’s life and the kind of person he was.  According to Omar Abdulaziz, he became an instant hero across the world after the news of his death.

Here is a well-documented account of the life and death of Jamal Khashoggi, an activist working for reform in a country ruled by a dictator.

Posted by donnarcopeland at 9:52 AM