NEWS OF THE WORLD 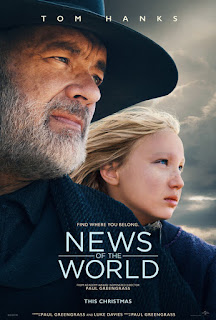 I love beautiful stories, and this is one.  Just as Captain Jefferson Kyle Kidd (Hanks) keeps his audiences transfixed with his “news of the world”, I stayed entranced throughout the odd journey of this grieving ex-soldier and a 10 year-old German girl, Johanna (Zengal), brought up by the Kiowa Indians for four years after they killed her parents. The child almost literally falls into his lap and it’s up to him to get her to her only relatives, a maternal aunt and uncle, in Castroville.  This is in Texas wild country just after the Civil War, and when they set out on a six-day trip in a makeshift wagon and two horses, who knows what they will encounter?

It turns out there is a lot, of course, the most creepy being a sleaze who thinks he can buy the girl off the Captain, and it takes a gun battle out on the hilly desert to dissuade him.  But there will be more challenges before they reach their destination, and Johanna has a chance to prove her worth several times in quick-witted action.

Director and co-writer (with Luke Davies) Paul Greengrass bases the story on a novel written by Paulette Jiles.  As with his other movies as writer and director (United 93 and the Jason Bourne movies), Greengrass has proven his mettle as a storyteller whose pacing of the action allows for greater suspense and emotional expression.  At one point when the two travelers pass by the wrecked settlement that used to be her home, Johanna stops and proceeds to go into her old house, where she finds an abandoned doll.  When she brings it out to the patiently waiting Captain, his advice is to forget the horror and develop new memories.  The wise little girl replies, “First, you must remember.”

The two actors are entirely in sync with one another throughout the story. Their faces eloquently express so much without their saying anything.  We’ve seen that in his numerous roles during Tom Hanks’ long, successful career.  To observe it in young Helena Zengal, is almost mind-blowing.  Since Johanna speaks Kiowa and doesn’t know English, there is little dialog between them, hence their reliance on nonverbal language to communicate practically and emotionally.

They are aided in this task by award-winning artists, musician James Newton Howard and cinematographer Dariusz Wolski, who express the varying moods and visual expanse of a well-told story.

News of the World gives us a jewel at the end of this frightful year; it will engage you, inspire you, and renew your faith in those trying their best to do the right thing.