PIECES OF A WOMAN 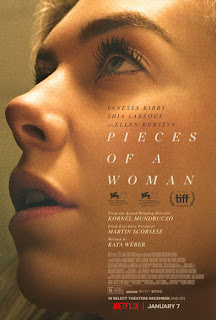 This is a powerful film.  It shows so much sensitivity—toward women and men—I became convinced the writer (a woman) and the director (a man) must have worked hand-in-glove with one another, as well as with the cinematographer.  And sure enough, director Kornel Mundruczo, writer Kata Weber are partners in real life. But with the inclusion of cinematographer Benjamin Loeb, it constitutes the impressive team that brought an artistic, psychologically informed work into being, not excluding the fine actors.  It touches on a number of controversial topics so relevant in our times.

Pieces of a Woman traces the path from exultation about a first pregnancy in which everything doesn’t go well through the immediate (six months), bombarding effects upon a family.  It details different ways of coping among a number of people and how those differences can have long-term effects.  The film brilliantly chronicles what I have for some time come to realize—that losing a child is probably the worst thing that can happen to someone.  Such a profound experience is sure to foster long-term consequences for those involved.

Martha (Kirby) and Sean (LaBeouf) appear to love one another intensely, and are overjoyed to be expecting their first child.  Sean is a gruff member of a bridge-building team who has a tender side, making it easy for him to give his wife the support she needs in the pregnancy.  They decide to have a midwife (Parker) for the birth.  How will that go?

The ensuing events tell the story of how this will all turn out, given the interrelationships we only discover later in the film.

Most touching are the scenes showing the breakdown of the relationship between Martha and Sean.  Martha’s adversarial relationship with her mother (Burstyn) is already foretold. Others between Sean and his brother-in-law Chris (Safdie) show the compromised position Chris is in. The relationships woven in between Sean and his mother-in-law, and an attorney (Snook) are plausible additions that enhance the suspense of the story.

Vanessa Kirby and Shia LeBeouf are well cast as the central couple, and make us believe they’re truly undergoing the pain.  Ellen Burstyn as the interloper-mother-in-law plays her role to the hilt—behind-the scenes manipulator with few scruples.  And, finally, Molly Parker as the accused midwife shows all of what she is supposed to in her role.

This movie was more difficult to stay with than I expected—primarily because of the long birth sequence (30 minutes).  Maybe the filmmakers needed to show this to people who haven’t had a baby, but for one who has been there (albeit under much less stressful circumstances), I found it hard to watch.  This led to my next question of who is this movie for?  Those who have been under similar circumstances? Perhaps, but I figure few people have gone through anything similar.  There is a thought that perhaps the writer and director have had just such an experience, and the film is a way to express what they went through.

At any rate, Pieces of a Woman is worth seeing, particularly for those awaiting a birth of a child and are curious—and if they have secured a midwife.  But otherwise, I’m not sure who will be interested in the film.  Part of my problem is with the title, Pieces of a Woman, which implies that there are only pieces of us.  We are all a whole, so I have no idea what the filmmakers intended.

As a chronicle of childbirth attended by a midwife, this film is excellent. I’m just not sure how many in the general public will find it relevant.

Chronicle of the effects of the loss of a newborn child on a family.

Posted by donnarcopeland at 7:30 AM