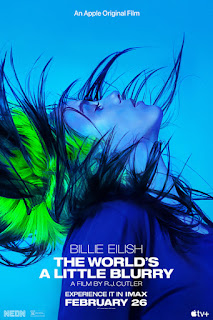 In the beginning of this film, I was impressed with seeing how a music video was made.  Then, I was impressed with how many people were fawning over the star, noting that she puts herself down and harshly criticizes her performances.  But it’s not clear whether she does this intentionally (to get praise and reassurance) or whether she is simply talking about how she feels.  As the film progresses, I’m drawn in, first of all by her appeal, but also by seeing a strong family unit working together.  Both parents are amateur musicians and have fostered the careers of their son Finneas and daughter Billie.

As much as I admired the star, there are all kinds of appealing features to this documentary, which Director R. J. Cutler and the other filmmakers have so competently produced.  There is the appeal of seeing all the facets of Billie Eilish’s personality, seeing them expressed in her outfits and her appearance overall, the presentation of her family—almost unique nowadays for the family staying together--and most of all, a teenager hit artist thanking her parents for their help, not only in helping with careers, but also in the way they brought the children up.  Eilish possesses an unusual combination of authenticity and playfulness.

The film does a great job in showing the stress of constant hordes of people pressing against celebrities.  We can see Billie reveling in this at first, then realizing how much it affects all of them.  We see a child star trying to cope with fandom and the inclusion of her Justin Bieber idolization brings that point home—even though it certainly surpasses most fans’ experiences.

Most of all, the documentary highlights the process of idolization from humble beginnings, ways of coping, and its effects on all involved—family and friends.  To see what a child at 17 years old goes through is enlightening.

The documentarians of Billie Eilish are to be congratulated on giving us a realistic picture of stardom achieved by a teenager.  It was moving to hear Billie’s mother expressing herself about how necessary a responsible parent is to help navigate the waters of fame.  She is keenly aware of the danger drugs and alcohol pose for such “lucky” performers.

Finally, it’s awesome to hear about all the Grammy awards Billie earned in 2020—including Record of the Year, Album of the Year, Song of the Year, Best new Artist, and Best Pop Vocal Album—with her brother Finneas sharing in those awards, along with his own Producer of the year Award.

For someone who did not really know who Billie Eilish was, I enjoyed the film a great deal for the way it covered a star, not only in concerts and acclaim, but as well in illustrating the background and values of a singer/songwriter star from an intact family.

An inspiring look at a new artist with a history different from the usual story of instant fame.

Posted by donnarcopeland at 2:20 PM