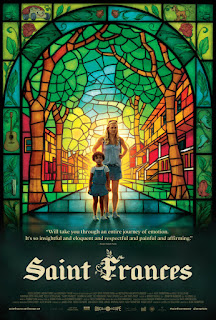 This is a potentially good film, but uneven in its quality.  I so wish it had been done well, because I’m sympathetic to most of the issues presented.  But the script (Kelly O’Sullivan) and direction (Alex Thompson) are deficient in telling the basic story.   Sometimes the action is overwrought, and other times almost devoid of emotion.  It addresses important issues, sometimes helpful in such, and sometimes not.  It’s almost as if the issues the filmmakers wanted to cover are ticked off one by one, then brushed away.  Importantly, the main character, Bridget (O’Sullivan), does not come across as a real person, which is doubly ironic, because the actress is the screenwriter!  This is her first time out as a feature writer, so I think she just needs more experience.

The action is around a fairly well-to-do Lesbian couple hiring a college drop-out to be the nanny for their two children, one a spunky Frances (beautifully portrayed by tiny Williams) and the other a newborn boy—who cries a lot, BTW, just so you know.  The nanny has good intentions, but little/no experience in childcare.  She is clearly not at ease with children (she was recommended to the couple by her good friend who had the job previously), and has to rely on her own upbringing and natural instincts.  (It doesn’t help the script—and I question why it was included—that her mother reveals to her that when she was a baby her mother had fantasies of…)

A major problem of the script is inserting so many weighty issues into a film that is supposed to be a comedy and a drama.  I counted at least six subjects overloading this film including postpartum depression, birth control and abortion, emotional repression, married and unmarried couples’ issues, the challenges and joys of motherhood, and nursing a baby in public.  Little vignettes of each of these subjects are inserted, and then we quickly move on to something else.  Bottom line:  too many issues for this kind of film.

The movie also brings up for me the current penchant of filmmakers to show in detail bodily functions and self-care, whether it’s brushing teeth (which they all do wrong from a dentist’s point of view) or dealing with a menstrual cycle—all of which I think are unnecessary to prove whatever point they’re trying to make.  It seems like an artifice simply to draw in viewers’ attention.  Please don’t show me bloody sheets and expelled products; I’m interested in the story!  Another issue is writing dialog for children that doesn’t match their stage of development.  In this film, little Frances giving wise counsel to Bridget is an example.

Maybe this is too much of a spoiler, but to illustrate the naïveté of the plot, Bridget does stumble through, even though she has made a number of serious mistakes, and then miraculously becomes a model for and great friend not only to Frances, but to Frances’ parents as well, who have used Bridget as a therapist.  I appreciated one point of the film, which is that it would be helpful to talk to a therapist when you’re troubled.  I also appreciated that both women are shown to be ideal employers, understanding, forgiving, and generous, which I see as realistic, given who these characters are, and gratifying.

Not as much a comedy or a drama as advertised, but more one of filmmakers attempting to get a foothold on making good films.

Posted by donnarcopeland at 3:50 PM