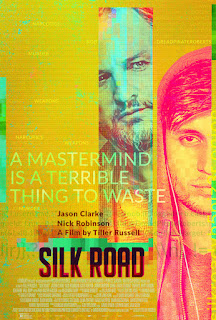 This film seems to have a number of targets; there is the old school “street” agent working to bring in dope smugglers, and the cyber threat from criminals using encrypted software and Bitcoin to bring in the dough.  We see how these two positions are pitted against each other in Silk Road, but we also see other kinds of conflicts, which are not well spelled out.

Silk Road is interesting in its introduction of a young political libertarian with high ideals who wants to allow people freedom at the expense of the “state” (i.e., the government).  One win for the individual is a loss to the state, in his way of thinking.

Ross (Ulbricht) is from an upper middle-class family, whose father has (perhaps vicarious) aspirations for him, but he has an itch to succeed on his own terms.  He keeps looking for something that will confirm his philosophical position, and he has only a dim view of his potential success.

He comes up with an idea of using Bitcoin to finance illicit drugs—non-traceable and most of all, outside the government’s authority.  He’s only mildly interested in some drugs, and has given no thought to the ultimate implications of his plan; the plan he has come up with seems to be perfect from his point of view.  He has no inkling of the number of users who would click on “Silk Road” and make him a wealthy man.

Enter Rick Bowden (Clarke), a DEA agent who has been disparaged for his previous actions as a “street cop” for getting involved in cocaine use.  After rehabilitation, he is now being assigned to the cyber division of the DEA, for which he is ill prepared, being considered as a dinosaur (e.g., no self-respecting cyber agent would deign to use street methods, his primary modus operandi).  He is being put to pasture; his supervisor tells him that all he has to do is sit at his desk doing whatever, and he will get his pension in nine months.

Can Rick do this?  Of course not; we get the impression he has never backed away from a challenge.  But there is an interesting juxtaposition in the movie between what older Rick can accomplish as opposed to what the younger Ross can accomplish.  Underlying that dilemma is the contest between “street smarts” versus “intellectual strategies.” The film seems to imply that the newer cyber techniques accomplish the job without the dirt and grime of the former.  But another component of the ending seems to imply that there might be something of worth in the dirt and grime.

I see the techniques used by Rick in “solving” the case as a huge and unnecessary distraction in the telling of the story.  It also muddies the waters in terms of what the filmmakers had in mind.  If they wanted to show how young people are naïve sometimes in their visions for society, they did that very well.  But inserting the torture of one of the players in demonstrating street techniques is unnecessary, misleading, and revolting.