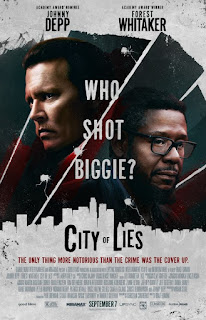 Just as the two main characters of this drama based on a true story spend much of the movie trying to unravel the truth, the viewer remains just as mystified throughout the film trying to keep track of all the leads being investigated and the large number of people involved.  Based on a book by Randall Sullivan entitled Labyrinth, City of Lies recounts the drama of retired LAPD police detective Russell Poole (Depp) and journalist Jack Jackson (Whitaker) teaming together 18 years after the unsolved murder of the Notorious B.I.G.—which Poole had witnessed—and any relationship to the death of fellow rapper Tupac Chakur earlier—to continue the investigation on their own. How these two unlikely partners got together is shown in the entertaining first scenes.

Ever since B.I.G.’s murder occurred, Poole has worked on the case officially and unofficially, but is stymied.  Yet, he can’t let it go.  Soon after it happened, Jackson had written about the murder based on interviews of Poole, but although he won a Peabody for his work, Poole’s information was discounted, so his own work was as well.  Nevertheless, Jackson is later asked to write a retrospective on the case, which means reestablishing contact with Poole.  When he approaches him, Poole shows only disdain for Jackson and his earlier Peabody-winning article.

But Jackson is persistent, manages to pull in Poole, and the two become good buddies who continue to try to uncover facts.  What they are taking on, though, is the L.A. Police Department and the possible complicity of city politicians.

This is a potentially intriguing story, but the filmmakers (director Brad Furman, writer, Christian Contreras, editor Leon Trombetta) are unable to present a clear picture of the facts of the case, the people involved, and how members of the LAPD and politicians seem to have been involved.  It must surely be a complicated set of events, but we rely on works like films to inform.  After the end of the film, it’s all a bit of a muddle.

Johnny Depp reestablishes his acting reputation in playing an acerbic loner obsessed with a puzzle that still plagues him.  Forest Whitaker likewise reestablishes his talent as a forceful black man sensitive to social boundaries but brave enough to test them.  The chemistry between these two characters is one of the strongest assets of the film.  It’s because of their interactions and collaboration that the viewer stays involved.

Although City of Lies has its flaws, it’s a good film in illustrating what detectives and writers are sometimes up against in their efforts to convey truth.

Posted by donnarcopeland at 11:46 AM