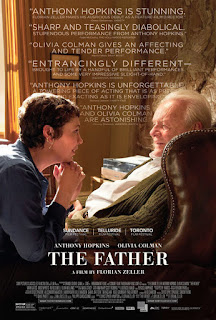 Old Age is always scary, and when dementia is a part of it, it’s horrifying.  This movie captures so many of the moments in an aging person’s life when it becomes crystal clear that things are not like they used to be.  Mystification is probably the worst of it, the swirl of people floating in and out and all around, so that one hardly remembers his/her own name.  We see one such person in Anthony Hopkins’ character, Anthony, whose psyche is portrayed in The Father.  That is, we see the world from his point of view, an impressive accomplishment of Florian Zeller (director of the original play and the movie), and Christopher Hampton (writer of the screenplay).

Their work is clever in that we’re presented with scenarios that seem quite plausible, then as figures keep switching, we realize that we’re seeing the world through the aging Anthony’s eyes.  We get confused, just like he does.  Welcome to old age!

Anthony Hopkins as Anthony and Olivia Colman as Anne give us stellar performances, capturing the dilemmas of aging father and concerned daughter.  Colman is adept in assuming a kind of role in which she has earned her performance awards.  Hopkins has a bit more of a challenge in portraying dementia, although the variety of his previous roles has shown his flair for all kinds of characters, from the upstanding doctor (Elephant Man) to the uptight and proper British butler (Howard’s End, Remains of the Day), to the stroke victim (Legends of the Fall) to the flawed U.S. President (Nixon) and revered U.S. President (Amistad) to the swashbuckling pirate Zorro (Mask of Zorro)—all seemingly cakewalks for him.  On a sympathetic note, I appreciated seeing the interactions of Anne and her husband Paul (Sewell), trying to work out what to do about the aging father—within the earshot of Anthony—unbeknownst to them.  As the story proceeds, one assumes that their marriage does not survive the stress, and that Anne does move on, realizing—or deciding—that her life must go beyond her father.

The film is thus also strong in showing the tolls old age takes on the families of the elderly, particularly at certain decision points, such as whether to keep the elderly at home, in the home of a child, or in assisted care.  These may be wrenching for the children, perhaps more so than for the elderly, but disorienting for him/her as well.

Toward the end of the film, we get to see a highlight in the tender scene of the hapless Anthony and his current nurse (Williams) (who has previously been mistaken by Anthony to be Anne) in the elder home, assuming  the identity of his mother as he weeps for her loss in a moment of anguish.  Shout-out to health care providers who are committed to being whatever their patients need of them whenever.

Realistic and moving, The Father allows a glimpse into what most of us dread, end of life decisions.