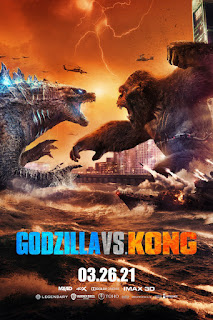 G vs K is an impressive technological spectacle surrounding the penultimate battle between Godzilla and Kong, with just enough other elements thrown in, and a bit of human interest and spoof to make it fun viewing.

Several story lines with their own action sequences weave back and forth, that at times seem to have no connection, but everything comes together in the end.  Several different parties are trying to achieve their own ends.

Kong has thrown a tree trunk into the sky that pierces a hole in the covering that hides him from Godzilla.  His caretakers had it installed because they don’t want him fighting with Godzilla.  When this does happen, it seems the only solution is to whisk Kong off to Hollow Earth under Antarctica, his old home, where a still untapped power source lies.

We’re endeared immediately by the tiny deaf girl Jia (Hottle) who has a special connection with Kong.  Her mother Dr. Andrews (Hall), an anthropological linguist, has tried to teach him sign language, but he doesn’t seem to learn.  As it turns out, Jia (Hottle) has been successful, so when the scientists decide to take Kong to the depths of Antarctica for him to save civilization, Jia is the only one Kong will trust to allow himself to be transported there.

The whole situation is complicated by the megalomaniacal plans of the Apex Corporation’s Walter Simmons (Bichir).  He thinks he has found the answer to the dilemma caused by having two monsters in the world, Godzilla and Kong.  If he acquires something that will leave only one Titan—which would be under his control—then…

To accomplish his aims, Simmons approaches the brother of the explorer who died some years back when his party tried to enter “Hollow Earth”, the area below Antarctica from whence the Titans (including Kong and Godzilla) came, and where there is an untapped power source that the earth needs.  Something called the inversion of gravity destroyed the crew when they tried to enter Hollow Earth. Simmons wants the brother, Lind (Skarsgard), to take Kong back to his old home so he can locate the power source, and he has developed a special plane to take them there that will avoid the gravity problem.

So there is one party headed to Antarctica consisting of Lind, Kong and his caretakers, and Simmons’ daughter as special emissary for his interests, Maya (Gonzalez).   Another party consists of podcaster Bernie (Henry), who has his suspicions about Apex which he voices explicitly on his podcast; his follower Madison Russell (Brown), daughter of Mark Russell (Chandler), director of the Monarch Relief Organization; and Madison’s nerd friend Josh (Dennison.    They plan to sneak into Apex’s headquarters, but unwittingly get transported elsewhere.  The third party is Simmons himself working with his chief technical officer manipulating events behind the scenes.

There are sometimes meaningful, sometimes entertaining dramas among all these people, which give the film a bit of the human element.  But primarily, this film is about the cinematic technology envisioned by Director Adam Wingard.  He wants the battles between Kong and Godzilla to be something never seen before in its use of technology to show more detail in the two figures and their fights, in the settings in which they’re engaging, and in the brilliance of color and flash, e.g., the texture and color in the sky at sunset and in the city at night with the neon.

Godzilla vs. Kong is a film for Marvel fans, and especially those who have followed the Godzilla and Kong sagas—but it can also be entertaining for those who are into adventure and fantasy.  Except for the advanced film technology, this is basically the usual fare in terms of character development and plot.

An epic cinematic battle with a good cast and technological advances that will intrigue you more than the usual plot.