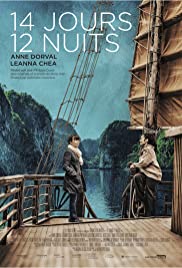 This is a gentle movie, a disquieting mixture of stunning, eloquently filmed scenes; warm, appealing characters; and profound grief in a pervasive thread running through it all.  The film opens with a snowy landscape, eventually focusing on a primitive thatched wall with a rectangular window that looks like a black hole.  To some extent the cinematographer Yves Belanger is the storyteller supplementing the sparse dialog.

Based loosely on a true story, the French Canadian screenwriter Marie Vien weaves a fascinating tale about a mother who travels to Viet Nam, the land of her adopted daughter who has been killed in an accident.  Her goal is to learn more about Clara’s native land as a way of connecting with her.  But the Vietnamese are still holding grudges against the French for invading their country, so Isabelle (Dorval) is not always given a warm welcome.

She decides to visit the orphanage where Clara was taken after her birth, and meets with the young woman who took care of Clara in her first year.  After initially being somewhat short with Isabelle, the woman shows compassion for her, looking her up later and giving her a clue about the birth mother.  Isabelle will end up contacting Thuy (Chea), which transforms the drama into a story about two mothers.

Director Jean-Philippe Duval presents the narrative with interspersing flashbacks, as seems to be the current preference among filmmakers.  Seldom nowadays are films presented in chronological order, necessitating the viewer’s periodic reorientations.  A welcome unifying element in this instance is the backdrop of Viet Nam’s natural beauty and bustling cities captured by cinematographer Yves Belanger and accompanying mood enhancing musical score of Bertrand Chenier.

In addition, the two fine actresses Anna Dorval and Leanna Chea deliver intensely emotional scenes that keep us curious and engaged, using body language and facial expressions to elaborate on the dialog. Their success makes us feel close to their characters and caring about how they fare.

14 Days, 12 Nights’ moving account authenticates the varying experiences of losing a child and unites them in a realistic whole.  The loss is profound no matter how or when it occurs and, clearly, processing its psychological effects is a part of adjusting oneself.  The filmmakers demonstrate their understanding of this fact throughout, but especially in one of the concluding scenes.

The talented filmmakers behind this very human, moving account show their appreciation and understanding of human experience and something of what it takes to adjust to loss.