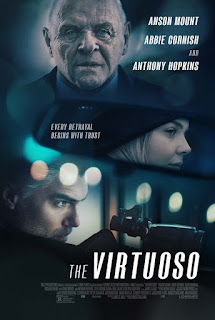 A virtuoso in crime with a conscience…  That’s a tall order.  Not one that could happen?  Maybe.  It’s not far-fetched, but that’s what this movie is based upon.  It starts out and we can see the virtuoso planning very carefully what he does ahead of time, with strict rules for self-behavior.  We’re impressed with his forethought in planning for contingencies and his precision.  Typically, he’s given only scant details about the job he is to do; nevertheless he is compelled to go forward, and when he is given a job that takes only 48 hours to enact—one in which he needs more planning time, he is not pleased but forges ahead.

The script by James C. Wolf, which has a few questions to answer to—is mostly fine, pulling us in, throwing out cues, and making every chance encounter meaningful.  But I think most people will see the denouement coming well beforehand.  This is an unforgiving give-away in the film that Virtuoso portends to be.

Kudos can be given to Anson Mount (the Virtuoso) for conveying the mystique and sardonic ambiguity needed for the role, along with Abbie Cornish (the Waitress), who lends the right amount of flirtation and genuine interest needed to further the story.  Anthony Hopkins plays the role of the “director” of crimes with practiced expertise, and provides enough mystery combined with benevolence to lend credence to the plot.

This is a sort-of playful crime drama that can be enjoyed during a relaxing evening at home.  It’s not a block-buster type of movie, but one that will entertain you on a pleasant evening.  Maybe the filmmakers needed more time, but I think they didn’t deliver what they promised—a gripping, well-crafted  scenario exploiting Mount’s and Hopkins’ assets would give us more of a thrill.

Let’s give it to virtuosos who know their craft and employ it to their advantage, even though they too are fallible.

Posted by donnarcopeland at 11:45 AM