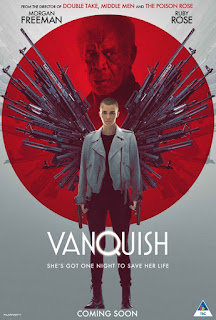 Astonishingly clever!  With a cool script, incredible cinematography (Anastas N. Michos) and music (Aldo Shilaku), Gallo et al. have recreated the genre in a very different way.  Morgan Freeman in his inimitable way and Ruby Rose bring it to life.

The story begins with headlines obscured by film credits of a hero policeman, Damon (Freeman) being shot and confined to a wheelchair.  Later, when we see his “confession” at church it’s a bit puzzling.  But all will be explained during the course of the movie—the whole movie.

Damon is sitting on the wharf at his glittering white mansion contemplating.  What is he thinking about?  When he is back in the house, his trusted caretaker Victoria (Rose) appears with her daughter—whom she is devoted to—wanting to serve dinner.  Very soon, it seems urgent for Damon to talk to her.  He wants her to do five errands for him.  These errands are related to her past life, which she has foresworn.  She argues with him, not succumbing to temptation.  He insists, appealing to her devotion to her daughter.

She has no choice; he has her over a barrel, so we see her donning special equipment and roaring out on a motorcycle, special helmet on head.  Her assignment is to pick up packages at five locations and bring them to him.  She isn’t informed about what they will be (although she seems to know), but eerily, at every stop she encounters someone who knows her from her past—a murky past.

Cinematography and music play a dominant role in the plot, accentuating emotions evoked in the viewer.  When the mood is scary, weird, tense—whatever—every element works to bring you along.

This is a story that, it turns out, is simple and direct, once all the elements are in place.  Maybe it’s one that some people will figure out right away, but I was led down the garden path, and thoroughly enjoyed it.

Not a great film in the grand scheme of things, but well done with notably artistic cinematography and musical renditions.

Vanquish is teeth gritting much of the time, but the underlying story is one of substance.