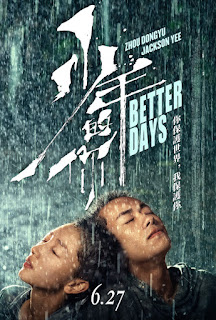 Bullying is no joke, as so eloquently demonstrated in this fine production from China/Hong Kong, skillfully directed by Derek Tsang.  Chen Nian (Zhou) is a quiet, studious teenager.  She is from a humble background (her mother has to survive by selling illegal products), but she’s very smart, and has promise to score so well in the upcoming national tests she is likely to be able to attend the college of her choice.

Ah, but life has its own agenda.  A group of girls at school pick a classmate to bully, with the result that one student kills herself.  Chen Nian is so moved, she shows sympathy and heartbreak, which makes her a candidate for the next target.  Sure enough, that’s what happens.

On the way home one day, a dangerous route, she observes a gang beating and dials the police, which brings the wrath of the gang upon her.  The one who defends her is the one who was being beaten, Bei Xiao (Yee).

Bei is a street kid who has had to survive any way he can.  The two then form a surprising friendship, despite her reluctance to engage with anyone other than her mother.  (This is surprising at first, but makes perfect sense the more you know.)

But Nian needs protection, so she takes Bei up on his offer to protect her from the school bullies.  The script writers (Wing-Sum Lam, Yuan Li, Yimeng Xu, Nan Chen) periodically insert tenderly humorous scenes in the movie that compensate for so many brutal ones.  For instance, Bei has Nian pull out her notebook and a pen from her backpack to sign a statement that she owes him [something, purposefully unspecified] for his protection, since she has told him she can’t pay him.  It should be noted that the script is based on Jiuyue Xi’s novel, translated as In His Youth, in Her Beauty.

The plot becomes impressively complex, and to the filmmakers’ credit, it becomes not only a nail-biter, but makes substantive social commentary as well.  The events at school and on the way home dial up the tension, particularly viz a viz the main characters.  In the process, social class arises as an issue not acknowledged much by the characters, but clearly evident as a force.  I love the way the film so touchingly answers the question of how a bright college-bound student and a punk on the streets can bond together in a life-long commitment.

Zhou and Yee, the two main actors along with Fang Yin as the young policeman, give glowing performances which give the film so much soul, and bring out the deep humanness and commitment to honesty and wisdom each of their characters conveys.

It’s unfortunate that the filmmakers go along with the current fad (at least that’s what I call it) of cutting back and forth between current and past scenes, which I think is meant to make the film more exciting, but simply annoys someone like me.

Better Days is nominated for an Academy Award in the International category, well deserved for such a perceptive film.

A surprising take on bullying among teenagers, showing with great sensitivity the complexities involved, but, unfortunately, likely to be missed in our rough and tumble world.