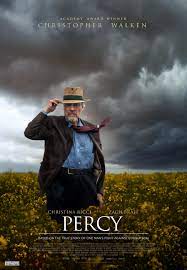 Percy is an irascible old farmer who’s had minor disappointments with his son who chose teaching rather than farming (which Percy’s ancestors from the old country had perpetuated), but he’s come to terms with that, and although he rarely expresses any emotions, he clearly loves his wife, son, and their community in Saskatchewan, Canada.

Award-winning Christopher Walken fills the order perfectly to play the part of Percy.  He is leading a relatively happy life in his early 70’s, has just invested in some new farming equipment, and his supportive wife Louise (Maxwell) and he are close to the townspeople in their small community.  They have no idea what’s ahead.

What’s ahead is giant corporation Monsanto suing Percy for some of his canola seeds resembling their patented ones.  It claims that every product harvested by Percy is actually theirs because he didn’t pay for their seeds, even though the seeds were (presumably) blown by the wind into his crop.  What becomes a matter of contention is how Monsanto’s seeds got mixed up with his.  He had followed instructions from his ancestors to save the best seeds from one year to plant the next year.  As far as he knew, these seeds were separate from any others.

Enter an environmental group wanting to make Percy’s case known to the world.  Rebecca (Ricci) is a young, passionate advocate for the cause against Monsanto for its GMO, and she encourages him to fight for his case.  His lawyer (Braff) tries to persuade him to settle with Monsanto to save horrendous legal fees involved in contesting the case.

Percy is a practical man who relies on logic in making his decisions.  He is clearly torn about what to do.  Rebecca sees the issue on a global scale; so many farmers are being done in by Monsanto, and she urges him to fight, offering some incentives for getting financial help.

Unfortunately, the film is not clear about exactly how much help Percy actually receives from the environmental group.  He continues to fight his case all the way up to the Canadian Supreme Court.  But the film is timely and worthwhile in pointing out the encroachment of corporations like Monsanto on innocent people.  For example, “each GM seed is patented and sold under exclusive rights.  Therefore, farmers must purchase the GM seeds anew each year, because saving seeds is considered to be patent infringement. Anyone who does save GM seeds must pay a license fee to actually re-sow them.”

The film directed by Clark Johnson is engaging, and highlights the current issue of multinational corporations having so much power over the common people.  It makes its point very well, and instead of delivering ultimate satisfaction, shows what efforts it takes to defend against large corporations bent on making a profit despite its repercussions.

Taking on a big corporation these days is an almost insurmountable problem for an individual.

Posted by donnarcopeland at 6:09 AM