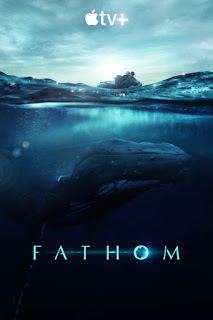 Two researchers have found their calling in attempting to track the sounds of whales—Dr. Michelle Fournet off the coast of Australia and Dr. Ellen Garland off the coast of Scotland.  The documentary demonstrates how they are going about tracking and recording the whales’ sounds and their attempts to communicate with them.  Specifically, they want to have “a conversation with a whale.”

We are shown some of the elaborate equipment that has been designed to do the work at the Cornell University Bioacoustics Laboratory.  There are innumerable “calls” they’ve already recorded, especially for this film the sound of a “Whup”, which seems to be used to say ‘hello’ and introduce themselves.  Dr. Garland has been able to sound out and name the whale sounds she has identified.  She can reproduce them in a most convincing way.

The film is directed by Drew Xanthopoulos, with editing done by Robin Schwartz.  It leaves much to be desired in that the subject of the songs of whales is so much more intriguing than what the director actually shows us.  Part of the problem is the editing, which is so choppy it breaks up any hope of a narrative.  The filming jumps back and forth between Fournet’s and Garland’s field work, often concentrating on what I think is unnecessary information, such as the difficulties in doing this kind of research, the drain on personal relationships, etc.  I can appreciate that it must be hard—the researchers are out in the field for weeks at a time in a very nature-tensive environment than what they are used to back home.  And things like a break-down of a boat motor causes frustrating delays.

It seems like a more apt description of Fathom by the way it is filmed should be something about how this type of research is so hard, not just in the technical aspects but as well in the toll it may take on the researcher’s personal life.  Much more intereating would be elaboration on facts such as that the whales’ communication have evolved over millions of years and that they constitute a global cultural network that we know so very little of.

As a film by women about women’s work, I was disappointed; they seem wimpy as compared to men, and I’m sure that is decidedly not true.  The researchers must have tons of material they could have used to describe in more detail how they “read” and listen to the sounds of whales as captured by their recordings.  It’s only in the last ten minutes of the movie that we get a taste of that.

Fathom is much more about the difficulties in conducting research on whale communication than it is about describing the findings so far.