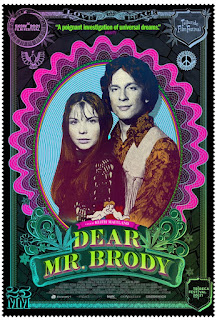 Even among documentaries this film is likely to be one of the most unusual accounts of a human being.  Michael James Brody, Jr., was an heir to the Jelke “Good Luck” oleomargarine fortune.  Despite this, he started out rather unlucky in that his mother died when he was three years old, and his father was rather distant.  He was cared for by nursemaids in his early years.  Brody Sr. had set up a three-million-dollar trust fund for his children when Michael was small, so after his father died, Michael came into a small fortune when he was twenty-one.

It turned out that Michael was a hippie at the time who felt compelled to honor the popular movement’s message of peace and love in the ‘70’s.  Pre-the digital age, he generously gives out his phone number and address after announcing that he is ready to give away his $25 million fortune to “everyone.”  He announces that it is not about money, but about love.

Of course, this brings thousands of people writing to him and appearing at his door.  He is clearly impulsive, marrying a woman named Renee two weeks after meeting her and doing things like buying all the tickets on a plane to fly home from his honeymoon in Jamaica.  That part is a familiar story of heirs who have no conception of money management.

The reason for the documentary is to make the point that as interesting and novel as Brody’s story is, it’s the thousands of letters written to him that will be/should be of interest to us.  Writer-director Keith Maitland and his collaborators cleverly draw us into Brody’s story, then highlight the people writing to him asking for some of his offered generosity.  They even interview some of the letter writers to give life to their stories.

All this—the film—happens after producer Melissa Robyn Glassman, working for film director Edward Pressman, notices a dozen boxes in his storeroom labeled “Michael Brody.”  Curious, she begins to investigate further, finding literally over 30,000 unopened letters addressed to Brody and thus the film is a documentation of what she found and experienced.

It’s a story worth hearing, although maybe somewhat predictable.  I really enjoyed it but wished the filmmakers would have identifed the speakers.  It was only after the film ended that I pieced together that Melissa Glassman—the primary storyteller—is employed by a filmmaker named Edward Pressman who has stored twelve boxes of letters sent to Brody with his own aspirations of making a film.  Figures will appear throughout the film whom we have no way of knowing until later, after their names have appeared.

That being said, I will say that the primary point of the film is to tell the stories of so many of our fellowmen and fellowwomen who are going through horrific times (The film is of people in the ‘70’s, but I’m sure it’s even worse now.), with most of us—including our leaders—ignoring their plight.

A strange wake-up call about a wealthy heir who will draw our attention to others in desperate circumstances needing our understanding and help.