YOU WON'T BE ALONE 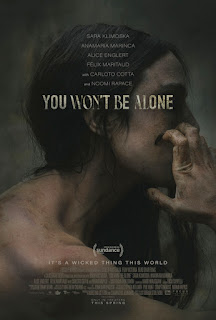 This is a movie for hard-core horror fans and those who savor Terence Malick films.  It takes place in 19th Century Macedonia, where witches were well known by the village populace as living for centuries and feeding on infants and animals to maintain their life-blood.  We meet the witch “Old Maid Maria” (sometimes called the “Wolf-Eateress” who was burned at the stake, but still roams around in a dessicated body) in the home of a mother of a newborn who is crying plaintively.  The mother recognizes the witch as one who has haunted her village for 200 years, panics, and begins bargaining with the witch not to take her child, named Nevena.  They finally hit upon a deal whereby the mother can keep the child for 16 years, at which time the witch will reclaim her.  The witch marks the baby by scratching out its tongue, thus rendering the child mute.

The mother hides the child in a cave and sure enough after 16 years the witch reappears to claim the Nevena (Klimoska).  Now, of course, the witch is not much of a mother as she herself acknowledges, so she treats Nevena poorly.  Nevena tries to get back at her once by throwing a stone at her back, but then is severely punished by the witch’s almost drowning her.  Part of the beauty of this film is to see the natural curiosity that Nevena shows as she becomes aware that there is a world of humans “out there”, and she would like to learn as much about them as possible.

The old witch has taught her how to shape-shift by means of “witching spit” in which she zaps the being she wants to enter and imbibes its organs, shoving them into her chest, and sucking on the wounds of the victim.  (I had to turn my head away at this part.)

After Nevena accidently kills a young peasant girl, she enters her body, and being curious, she wants to see what human life is like.  In the story she takes on various shapes:  the body of an abused wife, Boslka (Rapace, who also plays Navena #2), a male attacker, a village hunk who introduces her to the joy of sex, and others.  What she sees is that the world in her language is “a burning hurting thing…a burning breaking thing.”

You Won’t be Alone is dramatically interesting, but the combination of a very dark screen and a complex script without much explanation means the viewer must work hard to understand the plot.  The very end provides some explanation, particularly about Old Maid Maria and how she came to be.

A dark and chilling tale about an old witch in 19th Century Macedonia claiming a child when she becomes 16 and turning her into a shape-shifting witch.