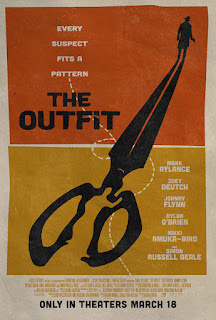 A lowly tailor plays a bait and switch game when he is involved in complicated situations with some of his customers, most of whom are criminals.  He can weave a convincing story on the spot, which saves his life numerous times and provides us with great entertainment.  Director Graham Moore (who wrote the script for The Imitation Game) and co-writer Johnathan McClain’s script is a wonder in itself with its constant situational changes suffused with threat and requiring immediate action—all while being intelligently calculated.  Background stories of all the main characters are dribbled out deliberately and explain why the person we see is who he/she is.  “Ah ha!” moments will occur throughout the viewing time for this movie, which is also part of its enjoyment.

It seems as if the Leonard Burling character was written precisely for Mark Rylance.  As a soft-spoken British man outwardly unassuming ([tailoring] “isn’t art.  It’s a craft.”) he carries a big stick of craftmanship and wit that frequently take his listener off guard.  He knows how to charm and distract the most fearsome mobster into listening to his story as it is unfolding, and he knows how not to be seen slipping away for some contrivance that will be all-important later.  In addition to the plot, just observing him in action is fascinating.  Rylance is well known and respected internationally, most notably for his work in Bridge of Spies, Wolf Hall, and this past year in Don’t Look Up in which he plays a less than admirable character to great effect.

It is curious that the tailor allows a drop-box at the back of his shop for his star client mobster Roy Boyle’s (Beale) gang to communicate with one another and plan operations.  Burling makes no eye contact with them as they pass through his work room, being completely engrossed in his tailoring. His receptionist Mable (Deutch) resembles her boss in her astuteness and pleasant overlay, but she too is interesting to observe as the story unfolds.  In the end, we will see how all this fits together and makes sense.

Composer Alexandre Desplat’s music and Dick Pope’s cinematography capture and elaborate upon The Outfit’s mood and suspenseful uncertainty in a way that makes it all of a piece.

It’s always a joy to see a smart, clever person with a good heart in action.

Posted by donnarcopeland at 12:30 AM