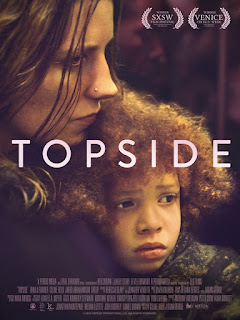 Topside is what a five year-old girl named Little (Farmer) living in the tunnels beneath New York City is told is above her.  Her mother Nicki (Held) mysteriously disappears during the day and is with her at night and in the morning when she wakes up.  But Little is quite alone during the day except for a friendly man “next door.”  He doesn’t approve of her mother’s arrangements, but can’t seem to talk her out of it.  He chats with the girl from time to time and finds that she has a great imagination but is clearly missing out on normal school learning.

When it becomes known that the city is clearing out the underground residents, Nicki attempts to solve her problems, but is clearly a child herself, without many resources.  She doesn’t even seem to know about (or perhaps trust) city services, and when she is separated from Little during a harrowing trip “topside”, she has no idea what to do, and becomes hysterical.

This is a sad story where the viewer may be constantly, although silently, calling out with advice, as there are any number of avenues Nicki could pursue to get help.  Which makes me wonder about the filmmakers’ (writer/directors Logan George and Celine Held) intent in making the film.  Perhaps it’s to show the increasing importance of homeliness in cities and the limited resources available to those in such straits, sometimes because of mistrust of city services.  The filmmakers do a good job in showing part of why the mother is in the straits she’s in (even though still holding on to basic values) and the adaptability of children to adjust to all kinds of circumstances.

But it’s hard to watch, especially during the long separation of two human beings so close to one another, and the power of addiction on a user.

Little (pun intended), played by Zhala Farmer, is precious and ever so appealing in the role of the child who has clearly benefitted from the love and playful attention bestowed upon her by her mother—who actually seems more like an older sister.  The child actor has already learned the power of an expressive face.  Held as the mother also plays her character as someone appealing who has lost her way and has no idea what to do to find a way out.  I especially enjoyed the performance of Fatlip, whose incredulity of the mother’s decisions was heartwarming.  Likewise—in a different way--Abrahamson’s performance of someone who only knows exploitation in relationships is right on target.

This movie is likely to appeal only to those who are interested in and have an investment in social issues within our society.

Take a subway ride—one different from any you have ever imagined.

Posted by donnarcopeland at 11:40 AM