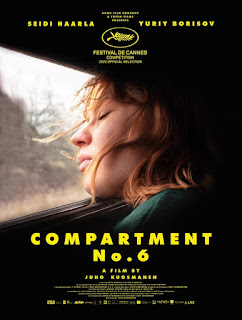 Laura (Haarla) is an introverted young Finnish woman who has aspirations of being an anthropologist.  Currently, she is in Moscow to learn the Russian language and staying with generous Irena (Drukarova), a professor of literature at a university, where she feels a bit out of place with the intellectuals at a party.  Laura and Irina had planned to go to Murmansk in northern Russia together to look at its famous petroglyphs (prehistoric rock paintings), but at the last minute Irina is unable to go, so Laura heads out on her own.

The long trip is the substance of the story, which has her in the same compartment as Ljoha (Borisov), a hard-drinking boorish Russian whom she avoids as much as possible, even getting off the train at one point, considering aborting her journey.  But she gets back on before the train leaves, and she makes some effort to be civil to Ljoha, who is full of questions about her.  They strike what appears to be an amicable place where she seems to be letting him in.

What will happen in their time together?  We will see, but, unfortunately, it won’t be very understandable.  The biggest fault in this movie is the lack of backstory for any of the characters to make their actions make sense.  Laura’s and Ljoha’s relationship is off and on, but the reasons for their shifts (first one, then the other) are unknown, partly because the script offers no explanation, but also because we don’t have any information about their backgrounds.  They’re all a little like the paper dolls that young girls used to play with; they might have a complete wardrobe, but the child must provide the drama.

None of the characters are admirable (or even likeable), and the train ride soon makes the viewer claustrophobic.  It looks like Laura never bathes (at one point on the train she tries to brush her teeth, but there is no water from the tap) or washes her hair.  She resists others, then goes along, often passively; we are given no idea of what she really cares about.  Irena, her apparent lover in Moscow, suddenly becomes distant on the phone the day after Laura leaves and apparently hasn’t followed through in making trip plans, which Laura thinks she had made.  Ljoha is especially vague and contradictory, seeming to have no sense of boundaries initially, yet in the end is impenetrable.  He appears to be a dimwit at first, but suddenly he seems to be able to make anything happen.

This seems to me like a non-story devoid of characterization or much of a plot.  And if you think you might get a glimpse of the Murmansk Petroglyphs, sorry.

Imagine a long journey into the arctic north with a roommate from hell in your compartment and no way to turn around and go back to where you came from.