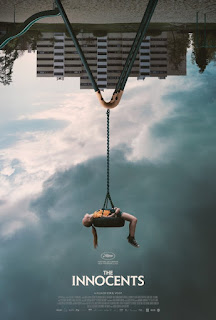 This is a story about children, some of it distressing and some of it rewarding.  Central is Ida (Flottum), a 4-5 year-old girl living in Norway with her parents and older sister Anna (Ramstad), who is autistic and mute, although she could speak at one time.  Ida is introspective despite her young age, and not inclined to give out much information, although she appears to be very close to her mother.

The family has just moved to a new city for the father’s job, so Ida must get acquainted with her neighborhood.  While exploring outdoors one day, she encounters Ben (Ashraf), and he playfully shows her some of his powers in telekinesis.  She is of course impressed and tries to do it herself, but never succeeds.  Early on, he shows another side of himself—a mean side.  Still, he is nice to Ida, and she often looks on at his feats with wonder and admiration—until he goes too far one day, and she is more wary after that.

The neighborhood is mixed race, but we don’t see much evidence of racial animosity, except once by some older boys toward Ben.  Ida often has Anna with her and is amazed when another girl named Aisha befriends them and seems to have a special connection with Anna.  She also has the power to “hear” what Ben is thinking and sets limits on him at times.

An interesting part of the narrative is that the parents all seem unaware of the children’s powers, and the kids don’t tell them, even when their fears are raised.  Writer-director Eskil Vogt has chosen to portray the children’s world with a clear boundary between them and the adults, even when very frightening and dangerous events begin to transpire.  I find it remarkable that even when parents question their children during intimate times, the kids do not tell about the mysterious powers they’ve observed.  Why Vogt decided upon this omission is puzzling to me.  In the conversation that Ida has with her mother about this specifically, the mother only gives vague, elliptical answers.

One strong point, though, is the portrayal of Ben’s own experience of his powers as something that bothers him, but he seems to be too young to weigh its value pro and con and resolve it to his satisfaction.  And he seems not to have access to any adult who could help him.  Much of the plot is left completely open at the end of the film.

Rakel Lenore Flottum is amazing in her skills at such a young age.  She easily holds a central place throughout the movie and has no trouble maintaining your interest in her.  Your opinion of her fluctuates across time as she matures and learns from experience, and the fact that such a young actress is able to convey such complexity is impressive.  In a similar way, young Sam Ashraf is able to keep his face impassive at times, and on other occasions allows you to see the utter anguish his character is undergoing.  Whereas Ida and Anna’s mother and father show good insight into their children and respond to them in helpful ways—with some limitations—the two (presumably immigrant) mothers of Ben and Aisha are either unprepared for their children’s talents or are too burdened by being alone and under stresses of living to be of much help.

The Innocents is a fine production with the subject matter treated in a novel way and primarily from the children’s point of view.  I found it to be an engaging horror story, even though distressing to watch at times.

Posted by donnarcopeland at 10:37 AM