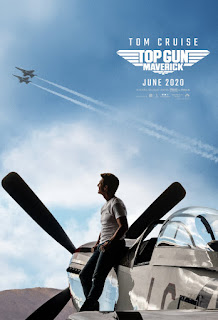 As with many Tom Cruise movies, this one seems made for him, although he doesn’t reign supreme all the time.  In the beginning, “Maverick” gets a lot of ribbing as an “old man” from a group of young Top Gun ace recruits, and his superiors are trying to tell him that new technology is going to make him and the planes he flies obsolete.  They’re obviously wanting to get rid of him (especially after he hijacks a plane to prove a point) and finally resort to thinking they will bump him into being a teacher.  Good luck with that—he has always refused career advancements that would take him out of flying.  Hence, he has stayed a Captain.

The plot is creative in coming up with solutions by which Maverick manages to get his way repeatedly—usually through some derring-do that his superiors must acknowledge is impressive.  Well, OK, so they give an inch, but then, he will take a mile, so to speak.

This is a very male movie in its illustration of how men relate to one another, especially in groups.  The beginning interactions among them are filled with bravado and macho competitiveness (insufferable at times from a female point of view).  Even the female recruit must do the same to be a part of the group.  Monica Barbaro as “Phoenix” very winningly illustrates this. Authority struggles underlie most of the conflicts.  One recruit, “Rooster” (Teller), has a long-standing resentment toward Maverick for something that still bothers both of them.  We also witness the “star pupil” in “Hangman” (Powell) who seems always to have the right answers and be on the right side, and the nerdy “Bob” (Pullman) who never seems to be able to lay claim to the group.

I do admire the writers’ (Ehren Kruger et al.) making Maverick’s ingenious flight plan for the primary mission of bombing a uranium plant a metaphor for the entire story.  To wit, expert navigation that takes risks (flying low through a narrow canyon while dodging artillery, then a steep climb to safety (hopefully) using one’s experience, skills, and basic instincts).  These skills are called upon by many pairs of characters in working through their conflicts.

The writers beneficially inserted bits of humor and romance periodically to offset the high tension and at times heaviness of the plot.

Along with the script, direction by Joseph Kosinski and a fine cast help move this Top Gun a step above many action movies that seem to be primarily about special effects and thrills.   These characters really move us and are so well drawn, we want to know more about them.

Jennifer Connelly is always a joy to see, and cameos by Ed Harris, Jon Hamm, and Val Kilmer serve the movie well.

Underneath the blaring sound and visual effects of Top Gun, there are heartwarming stories that portray real human struggles.

Posted by donnarcopeland at 12:09 PM