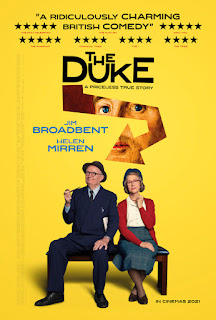 This is a strangely seductive movie, showing a British family with a rather daft though good-hearted Kempton Bunton (Broadbent), his wife Dorothy Bunton (Mirren), and younger son Jackie (Whitehead) not communicating very well with one another.  Dorothy is extremely critical of Kempton (for some good reasons), which makes him more secretive at times, and Jackie torn between taking sides with one then the other.  An older son appears about midway through, but doesn’t appear to have much in common with the rest of his rather straitlaced family.  Dorothy is especially offended by his frequent swearing.

Much about the family is a dramatization, but the story is loosely based on an actual theft of the Goya painting entitled “The Duke of Welllington” from the National Gallery of London.  Reference is made to it in a number of plays and movies ever since.

In the movie, Kempton is currently protesting paying the government a television license (which everyone was required to pay) since he cannot get the BBC and he feels strongly that everyone should be able to watch television as a public service.  After serving some time, he thinks he has solved the problem by taking the BBC tube out of his set.  He is not only against paying the license himself but feels strongly that everyone should receive television as a public service.

When the theft of the  Goya painting is in all the news, it suddenly appears in the Bunton household, with Kempton and Jackie making sure it is hidden even from the ever-cleaning Dorothy.

Much intrigue occurs around the painting, around Kempton’s temporary jobs, and the death of Jackie’s sister.  Towards the end, after the viewer has become more and more sympathetic to and interested in the family, there is a surprising shift, which makes the Roger Michell’s direction and screenplay by Richard Bean and Oliver Coleman impressive in its subtlety and its shift from an account of a zany man to a heart-warming story of community and care for others.

Jim Broadbent’s acting skills have made him a famous and favorite British actor.  Here, he makes his character so convincing one surmises that he is one with the kindly Kempton Bunton.  The same for Helen Mirren who after we so often see her now so elegantly dressed and coifed nowadays in the media we can see how easily she pulls off playing a frumpy housewife with firm opinions.  Fionn Whitehead and Matthew Goode as Kempton’s solicitor contribute to the appeal and quality of The Duke.

This is an engaging British production that pulls you in, makes you think, and have good thoughts about humankind.