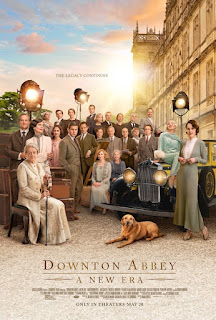 A new era, with mostly the right amount of sentimentality, joy, pain—and surprises.  The Crawley family is in a quandary about permitting a film crew to shoot a movie in their home (it’s still in the silent era), and of course—since they need money to fix the roof, they will agree.  But not without the vociferous protest from Mr. Carson (Carter), the ambivalence of Lord Grantham (Bonneviille), and the sheer delight of the starry-eyed staff, especially Daisy (Sophie McShera) and Mrs. Patmore (Lesley Nicol).

This proposal comes at about the same time as the news that Violet Crawley (Smith) has been bequeathed a villa in France from someone she never took seriously, and she is in turn bequeathing it to Sybbie, the child of Tom Branson (Leech) and his late wife Sybil Grantham.  It’s a delicate situation, in that the son of the mysterious man has invited the Grantham/Crawley family to come for a visit to see it for themselves.  There’s a bit of tension in that the son’s mother is not happy with the bequest.

You can see how all this is neatly set up to provide two new scenarios for the current feature—the second movie, the first of which had followed a popular series on PBS.  Not only that, the two strains of the story will separate the skeptics who will travel to France from the Hollywood fans in the cast who will remain to see the action (pun intended).

As a devoted fan of all things “Downton Abbey”, I admire the writer Julian Fellowes’ ability to sustain our interest by managing to keep us attached to the cast and characters of the episodes and all that happens to them.  To quote a colleague of mine, who said after we saw the film, “It’s like seeing old friends again.”  Considering that Fellowes has been able to maintain enthusiasm—not only that of fans but cast as well—through six seasons on PBS Masterpiece and two follow-up movies, is surely a rare accomplishment.

Fellowes also manages to highlight human propensities that pique our interest, such as showing that some people can never let go of jealousy, even after their beloved’s death.  Or on a more positive note, showing the beauty and elegance of a death that becomes even more meaningful after the fact.

For all my admiration, I did find some aspects of this production less than stellar.  For instance, there seemed to be a conscious effort to pair up characters, even minor ones, in a kind of matchmaking.  Although some are truly moving, some are just a little too treacly.  In addition, it seems like the filmmakers are trying too hard to bring the work into “relevance” for today’s audience, such as blurring the lines between the “upstairs” and “downstairs.”  Seeing the wait staff socializing with royalty is, I think, still a dream; not a reality (e.g., Prince Harry and Meghan of today).

But these are minor “beefs”; I thoroughly enjoyed watching this movie.

An update on the Downton Abbey series that for true fans will delight.