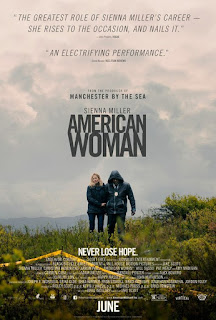 American Woman reflects the lives of many middle-lower class Americans today who are not necessarily exposed to the “American dream” of getting an education and then proceeding on up the scale. No, it’s more a comment on the lives of these citizens as it is and, unfortunately, the dilemmas many women find themselves in when they have not been steered toward that education we hear so much about, along with self-sufficiency and independence.
Debra (Miller) finds herself in the all too familiar situation of having to bring up her daughter on her own when she is still not really mature (e.g., rebellious, headstrong, impulsive, and angry), but she is doing the best she can. Somehow, even though her family relationships are studded with conflict, she believes they will support her when push comes to shove.  Debra clearly loves her daughter who is now a teenager and with a son of her own, and the mutual support and affection—even playfulness—between them is obvious.  Clearly, she is not prepared for what happens when her daughter doesn’t come home one night.
Along the way, Debra must make compromises in order for herself and her grandson to survive.  At first it’s “anybody who will pay the mortgage and other bills”, then it’s a charmer whose charms are not limited.  As she is fighting her way through these “significant others”, her family tries its best to support her, but she is not ready for that or tolerant enough of them to accept their offers.
What will happen to this woman?  She has a better chance if she is attractive (which she is), but she also needs capabilities in maneuvering through grief, loss, unexpected responsibilities, and pure luck.  It’s especially disheartening when she becomes involved with Chris (Paul), seemingly a mensch, only to have him turn out to be less than.  Will “true grit”—also passed down as an American virtue—see her through?
I pondered about why this British-produced film was entitled American Woman.  Is it that this woman’s experience is uniquely American?  I think probably not, but perhaps she embodies the stereotypical view of American women being unprepared for curve balls society might be throwing their way.
Sienna Miller plays her role with all the flair and pathos it requires, and pretty much holds the movie on her own.

The American story from a certain woman’s point of view.

Posted by donnarcopeland at 12:02 PM