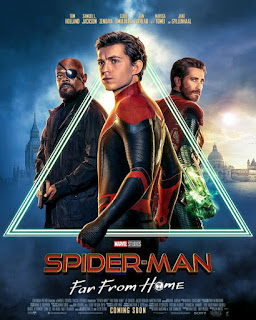 At first, it looked like this, the seventh rendition of Spider-Man as the central figure, was going to have a clever twist, and it did for a while, but the follow-through was less inspired. Nevertheless, the action is captivating as usual (except when the battles go on too long), and the special effects are especially grand.  Peter Parker has always been a kind of “aw, shucks” kind of guy, but that trait is more emphasized here—perhaps because he has been charged with an assignment he is not quite ready for, at least in terms of self-confidence and other concerns.  That tendency wears thin over time.
Peter (Holland) has a burning love interest, and he is beside himself with anticipation for the science trip his class is scheduled to take in Europe, when he plans to romance and declare his feelings for Michelle Jones (“MJ”) (Zendaya). So like many teenagers called to duty, when Nick Fury (Jackson) needs Spider-Man asap, Peter stalls, trying to get out of serving.
Hearing more, his enthusiasm for the task waxes and wanes, depending on who is talking to him, and although Fury goes with Peter’s resistance, he has a way of inserting his will at strategic times.  One of the incentives Peter is given is a set of special eyeglasses from Tony Stark that gives him access to technology that he can summon at any time without regard to cost.  Of course, Peter is thrilled; this is something he was yearning for in 2017’s Spider-Man Homecoming, to be Stark’s successor. But, curiously, deep down Peter now feels unworthy of the inheritance.
That, coupled with his adolescent passions, causes him to make a decision, the implications of which he is completely unaware.  Until later.
Peter is far from home, jaunting off to Venice, Italy, the Austrian Alps, Berlin, and London.  With filming taking place in all those sites, the visuals are heightened.   But Peter will not be on a sightseeing tour; danger and intrigue erupts at every stop.  He is relieved to find a potential ally in one of the heroes from another dimension named Quentin Beck/Mysterio (Gyllenhaal), who suddenly appears on the scene and who is able to thwart a huge new shape-shifting “elemental” threat that creates tornados and earthquakes on earth.  Gyllenhaal and Parker have a natural chemistry that charges up every scene they’re in together.  In all the goings on, Peter is caught up in complexities that take a while for him to figure out.
Interestingly, beginning with the 2017 film when Peter’s friend Ned (Batalon) learns about his identity, MCU has decided in this version to be more public about who he is.  This makes for charming interchanges between Peter and MJ.  Zendaya’s character is so interesting in her deadpan expressions; and their pairing is a delightful part of the story.

Except for one new element, Far from Home resembles previous versions; but for Spider-Man fans, this one is likely to be fun and exciting.

Posted by donnarcopeland at 5:36 PM