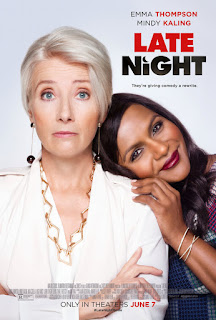 You know those movies that are so funny you miss some of the lines because people are laughing?  That’s what Late Night is; Mindy Kaling’s script is chock full of sharp witticisms along with plain common sense that provokes thought and consideration about topical issues that elicit ambivalence and the need to squirm.  Emma Thompson’s characterization of a gorgeous, haughty night show host who is dependent on her writing team’s jokes and who gets gobsmacked by an inexperienced, “factory worker” with a heart makes this comedy many steps above most.  Kaling has a lo-ooong career ahead of her. One of the most challenging assignments in movies and television is that of making a comedy that is really funny but thought-provoking at the same time.
Katherine Newbury (Thompson) has won awards for her late-night television show of ten years, but it seems to be getting stale and not keeping up with the times. As so often happens, a sudden social pressure makes the show runners start scrambling.  Diversity is one such concept.  “Hire a woman!” comes the pronouncement for the writing staff, and that’s how a Native American woman with little experience in comedy and coming from a chemistry laboratory gets hired for the “Tonight” show.
How Molly (Kaling) fits and doesn’t fit into this group becomes part of the story. But another part of it is how Katherine has to change in response to all kinds of forces coming after her.
Molly represents frankness and truthfulness, which is revolutionary in the entertainment world.  Not only that, she doesn’t observe the tacit rules of engagement, especially toward superiors. But the beauty of the writing is that Molly is usually right—no matter how much resistance she gets—in ways the audience will understand.  “Never give up” is the motto she pins to the wall behind her desk, but even she is put to task for this a number of times.
Katherine is a fine example of a narcissistic person who doesn’t bother to know anyone else, is extremely intelligent, goal-directed, and able to let the verbal jabs fly in a barrage against anyone in her way.  As a listener rather than the target, her retorts are actually funny and highly entertaining.  They appeal to baser urges that we are not able to express nearly so well.
The two female leads have an armada of different kinds of foes that women all over will recognize.  For Molly, it’s the clutch of male writers jealously holding on to their turf—even if it’s the ladies room that hasn’t been used because there haven’t been any women around.  (The show does a fantastic job in depicting the lame defenses males and whites give for their behavior.)  But it’s also the female boss above Molly who has the same prejudices in many respects the male writers have.  For Katherine, it’s the icy, all-business Caroline Morton (beautifully rendered by Amy Ryan), owner of the network, who is taking a ratings-only approach to scheduling/cancelling a show.  But most of all it’s her public, which she hasn’t bothered to “read” and listen to for years.  An entertaining—and provocative—aspect of the film is its emphasis in so many ways on listening.  Paradoxically, not listening is highlighted to show its importance.
Use of social media and managing it makes this film even more contemporary.  It models how to deal with it in a way that works for you, rather than allowing it to work against you.  I was reminded of one of my esteemed bosses’ pronouncements to us:  “When in doubt, tell the truth.”

I can’t think of anyone who would not be affected by this film and inspired to do better.  (Ahem…well maybe I can.)

Posted by donnarcopeland at 11:53 AM