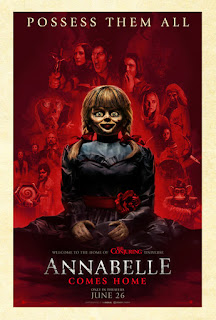 There is really not much to be said about this version of Annabelle, so much of it is seeing people walking around the house in a scared state.  There are a few real, jolting scares along the way, but mostly there are just weird incidents.   Most of the action is only during the last half-hour.
The film starts with Lorraine and Ed Warren (Farmiga and Wilson) coming home at night with Annabelle in the back seat, when they have to take a detour and their car breaks down.  Ed knows how to fix it, but they are by a cemetery, and we become apprehensive when “ghosts” appear from time to time.  But the Warrens make it home just fine, and the priest is there to exorcise the demon inside Annabelle and bless the house.  She is secured in a locked cabinet to “contain the evil.”
Soon, the Warrens have to leave again, and have engaged their usual babysitter Mary Ellen (Iseman) to look after their daughter Judy (Grace).  After a newspaper lauding the Warrens for their work in the occult, Judy is getting teased at school, and Mary Ellen’s friend(?) Daniela (Sarife) seems to have an uncommon interest in the Warrens and their house. Mary Ellen has let her know she is not invited to come over, but she barges in anyway, and invites herself to stay.  She soon manipulates Mary Ellen and Judy to go out skating while she has free run of the house.
Now, the Warren’s have a workroom in the house with a sign on it clearly warning of danger and forbidding anyone to enter.  Daniela is not one to follow rules (plus we learn that her father has died and she has a burning interest in contacting him; hence, her curiosity about the Warrens and their house).  You can guess what follows.  Daniela snoops, and havoc ensues.
In addition to there being long periods of nothing happening, as with many horror movies, we have to watch people doing stupid things.  First off, why would the knowledgeable Warrens leave a high school student in their landmine of a house to babysit their daughter? Why wouldn’t the responsible Mary Ellen call the Warrens at the first sign of weird goings on?  Why wouldn’t she as an asthmatic not keep her inhaler with her constantly?
Another problem I have with the film is depicting Daniela as someone you are eventually supposed to feel sorry for, aftert she has committed all kinds of infractions that make us thoroughly dislike her.  And seeing Lorraine Warren let her off the hook after all the pain and fear she has caused, also does not make sense.
It seems that a young Lothario is inserted just to spice things up.  He’s Bob (Cimino), the naïve nerd with a crush on Mary Ellen—stoked by Daniela—who comes to serenade her, egged on by the pizza deliveryman.  He also gets terrorized, but this insertion is just another sub-plot that makes no sense, and is probably included for purely fan-pandering reasons.
The young actors (we really don’t see Farmiga and Wilson much at all) are probably the only strong points of this film.  McKenna Grace, Madison Iseman, Katie Sarife, and Michael Cimino (as lovesick Bob) fill their roles nicely; it’s just the script by writer-director Gary Dauberman that lets the production down.  Well, that and he and the producers thinking they can milk the Annabelle story so many times (seven, I think!).
Unless the viewer is a never-say-die fan of theAnnabelle movies—regardless of their content—I would recommend staying away from Annabelle Comes Home.