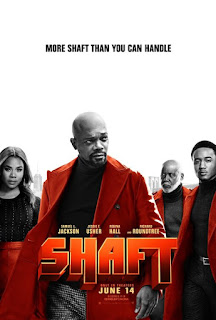 This will be my guilty pleasure for the year.  Shaft’s script by Kenya Barris and Alex Barnow is sharp, witty, and even laugh-out-loud funny, and the plot is complex enough to be of interest and without too many implausible elements. Larry Blanford’s cinematography shows artistic sensibilities, including following a guy knocked off a building, then capturing his last bumps down with a final splat.  Slow-motion scenes with bullets and characters thrown into a glass wall are not new, but these have a kind of flair that puts them a notch above most.  Director Tim Story should be proud of his accomplishments in making this an engaging and thoughtful film, a cut above the usual action/comedy/crime drama.
I like the juxtaposition of the traditional Jackson Shaft character (hard-core ex-cop who now has enviable street cred, specifically in Harlem) and his MIT-educated FBI son (beautifully played by Usher) whose mother (Hall) has tried her best to shield him from his father, with the result that he is regarded as charming and respectful in his current social circle, but regarded as a complete boob (i.e., sissy) by his father and his old-time cronies.  This humorous juxtaposition is carried along in the son’s high-tech skills versus his father’s “old school” ways, and is a divide that must be bridged for there to be a meeting of the minds.
Life has a way of shaking up human plans.  Young John Shaft is vying for agent status at the FBI, but at present is a data analyst.  When one of his good friends dies under suspicious circumstances, John is compelled to make sense of it, which necessitates a trip to Harlem where his friend was found, reportedly from a drug overdose.  John knows that Kalim was not using when he saw him the day before. But one trip to Harlem when he attempts to meet a drug dealer who supposedly supplied the drug, lets him know he is out of his element, and so he needs to call on his father.
The rapprochement between father and son lends much of the comedic element to the film, but not without emotional valence; they approach one another with tons of misconceptions and biases, which are usually dealt with comedically, but (to the film’s credit) hard truths and petty biases command their attention, and to deal with them, it ends up transforming both men.  When John Shaft the first appears, we get the bonus treat of seeing three generations trying to cope with their differences. Love (although not immediately recognized) ends up being the bond that can cement their connections.
All the actors bring home their roles, especially tried and true Samuel L. Jackson being his usual irreverent macho man; Jessie T. Usher expertly evoking the “white-i-fied”, gentle black man who has learned a thing or two about guns and hand-to-hand combat in his FBI training; Regina Hall as the outraged black mother attempting to “gentrify” her son; and finally Richard Roundtree playing the lovable-but-still-gnarly patriarch of men in a family thwarting conventional rules.  Not to be discounted is Alexandra Shipp, who excels in furthering female roles that go against stereotype.
Considering Shaft contextually, as representative of a genre that is traditionally denigrating toward government (rules), women, and “outside” groups like Muslims, yet has some kind of truth and certainly humor that makes you want to forgive, it’s a good movie.  And hence, my seeing it as a guilty pleasure; I was entertained and could laugh and enjoy it so long as I remained in its “space”, not pondering about its contrast with actual values I hold dear.

Not to be taken too seriously, Shaft has soul and heart, and a comedic edge.

Posted by donnarcopeland at 11:48 AM