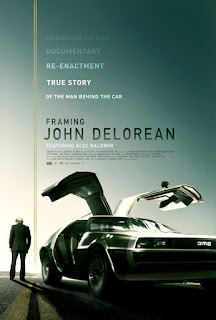 This is a fascinating documentary about perhaps the most famous wannabe carmaker in history, John Delorean.  Well, he was able to produce some cars, but when he thought he was hitting it big, most of the Deloreans being produced had major flaws.  Couple that with sudden competition from Japan’s Volkswagens (and the trend toward smaller cars) and a major change in British government (enter Margaret Thatcher) when he had taken his company to Ireland, he is in a tight spot.

It’s a tale of a golden boy destined to be the head of General Motors, the major car company of the time.  He moves up rapidly from a simple engineer, taking calculated risks like producing and marketing the Pontiac GTO, (aka, “muscle car”), which other GM executives thought would never sell.  It did, big time.  Now, GM is in a dilemma; Delorean is GM’s biggest moneymaker for the company, but the elders cannot condone his lifestyle (party boy).  There is a move to oust him from GM, and when one of his planned speeches gets leaked to the public, he is let go.  However, Delorean being who he is, turns the fracas into a hero win for himself.
It gives Delorean the opportunity to go off on his own, taking one of GM’s foremost engineers, Bill Collins, with him, and forming the Delorean Motor Car Company. It’s when Delorean starts having financing troubles that he begins to cut corners and abandon any ethical principles he had before.  He makes a deal that involves a new engineer, Colin Chapman (edging out Collins) and a shady financing company, and decides to locate his company in Belfast, Ireland.
Once again, time pressures were on to build the factory, hire workers, and turn out a quality product.  But although the company was able to turn out thousands of DMC-12s, the cars had major flaws.  Moreover, there were other concerns related to a change in UK government (enter conservative Margaret Thatcher) that would not grant them the government concessions they had been promised before and were counting on.
Delorean’s desperation coinciding with President Ronald Reagan’s war on drugs is epitomized in his being arrested for drug trafficking, a deal set up by U.S. agents, but he is not convicted by a jury which objects to the government’s interventions.  Delorean does not escape home free; other charges will be filed about his financial shenanigans.
This is a story about a rising star with all the promise to succeed big time, but events partly of his own doing and partly having to do with an international economy, thwart his fondest dreams.
The decision of documentary filmmakers to insert actors into a documentary is puzzling.  For instance, the efforts in showing the make-up necessary to convert Baldwin into the visage of Delorean is interesting, but turns out to be more of a distraction and beside the point than a help, because there is so much archival footage available.  I can see more the usefulness of having Morena Baccarini portray Delorean’s wife, Cristina Ferrare, because we need to see the beauty that must have captivated Delorean and caused him to divorce his first wife, but this addition is not really necessary either.
In sum, Framing John Delorean is an interesting foray into an examination of his personality and the inside and outside forces that determined his ultimate fate.

An examination of a man who could be king but for human flaws.