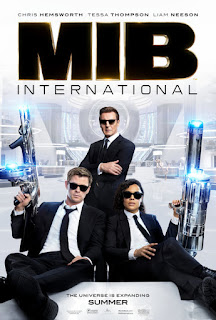 This is Men in Black:  International; so it will take place in Brooklyn, Paris, London, Marrakesh, and “Riza’s fortified fortress of sheer death”—wherever that is.  Following the High T’s (Neeson) maxim:  “Always remember:  The universe has a way of leading you to where you’re supposed to be, at the moment you’re supposed to be there”, Agents H (Hemsworth) and M (Thompson) will travel the world to uncover the Hive enemy or (God forbid!) a mole within their own organization.
Molly has been interested in coming to know “the truth of the universe” since she was a child and visited by an alien.  She protected said alien from the authorities looking for him, and upon fleeing he made a promise to her in his own language, although she didn’t understand what he said.  Subsequently, she always took note when strange happenings occurred, and when she was grown up, she began looking seriously for ‘them’ (Men in Black). She actually does find them, much to the chagrin of Agent O (Thompson), who reluctantly gives in to her pleas and assigns her the name of ‘M’, sending her on assignment under the supervision of Agent H to find and destroy the enemy.
Although Agent H has an excellent reputation and is tapped to take the High T’s place when he retires, at this time, he appears to be “vaguely inept, arrogant, and reckless”—in the words of M after she has come to know him.  But he is experienced.  She, on the other hand, seems gifted with both a sixth sense and logical reasoning in solving problems.  These two:  What a combination for a team, but there’s an underlying “like” for each other that keeps them working together.
The main plot for this film is weak; that is, we don’t get much invested in the intrigues and struggles of the Men in Black until, maybe, the very end when the mole is revealed.  But there are some creative insertions along the way that help keep us engaged.  One is a tiny being who has lost his queen and becomes attached to M.  She names him Pawny (voice of Nanjiani), and he becomes her protector, as well as the arbiter in M’s conflicts with H.  He is also the resident comedian.  Another is M’s unexpectedly encountering the alien she protected years before.
I think this film is a victim, like so many remakes and sequels these days, of a “been there; done that” reaction.  It appears that business aims are taking precedence over creativity in films like this.  They’re reasonably well done in terms of craft, but the mark of “retread” is unmistakable.  In this instance, there is not much that is new and creative to make us go, “Wow!”

Think of this film as simply another retread in the genre of “action, adventure, comedy.”

Posted by donnarcopeland at 11:35 AM