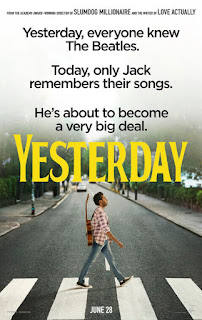 Clever fantasies require a little bit of tongue in cheek, and if you can go with it, you’re in for a treat.  In this one, something major happens all over the world that creates holes in people’s memory, such as for Coca Cola, cigarettes, and the Beatles. The Beatles?  Only one man, a failing British singer-songwriter, remembers them or their songs.  When his friends don’t seem to get his references to them, he sings “Yesterday”; but indeed, not only do they not recognize it, they think it’s great.
Many things happen by chance rather than design in this story, partly because the man who remembers, Jack Malik (Patel), is so unassuming and artless.  All he has to do is play a few songs and they catch on like wildfire (a testament to the Beatles’ music).  He maintains an air of disbelief throughout.  Soon, he is contacted by Ed Sheeran (the real Sheeran), runs with his group for a while, and gets to Hollywood, with the aptly named Debra Hammer (McKinnon) as his agent.  All these interactions are funny, because they capture some of the real world of entertainment today.
Most notable in this respect and ultimately the star of these sequences, Kate McKinnon as the Hollywood agent is sizzling in her best Saturday Night Live persona. I have to wonder if she contributed to some of her lines.  In this movie, she helps propel Jack to world stardom, but always with hilarious ways of expressing herself, e.g., to Jack’s parents, she asks, “And when did you learn your son was too good for you?”  Always a put-down within a show of support.  Double meanings are a McKinnon specialty.
In the story, Jack becomes a world sensation backed up by the Hollywood machine, and plays to screaming fans in the thousands.  He’s more than a little bewildered, is racking his brain constantly to remember all the songs, and has pangs of conscience, but it’s like a moving train propelling him forward.  Himesh Patel (known for his work on British television for “Eastenders”) embodies his character seamlessly, showing his talent in music as well as acting.
The film elicits many chuckles, such as the times Jack tries desperately to Google anything connected to the Beatles and only comes up with “Beetle”, and for John and Paul he gets “Pope John Paul.”  Another time, when he is asked how he comes up with so many songs so quickly, he replies with sincerity, “I don’t know; it’s almost like they’re written by someone else.”
During the film, I wondered how the filmmakers would wrap up this incredible fantasy. They did it partly by incorporating a triangular love story involving Lily James as Ellie, Jack’s first agent—which I thought could have been dispensed with—but the resolution of which, for some, might be the point.  But the way in which they wrapped up the Jack Malik’s career story is paramount, most of which I think is very clever, minus a few maudlin scenes with a couple and someone from the past.
Directed by the admirable Danny Boyle (Slumdog Millionaire), Yesterday can be praised for its clever premise written by Jack Barth and Richard Curtis, its renditions of Beatles music by Daniel Pemberton, and its casting actors Patel, James, and McKinnon.  A Beatles fan like me can just sit back and enjoy the music and the jokes without dwelling on reality considerations.

A story about when a serious bicycle accident and stroke of fate coincide to provide the opportunity of a lifetime.

Posted by donnarcopeland at 2:50 PM