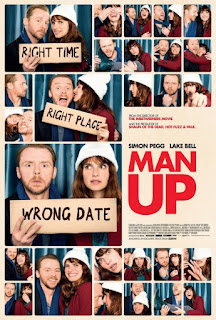 Man Up, a UK production, is a bit like a British sitcom, in which a youngish single woman half-heartedly looking for her man is mistaken for a man’s blind date at a match-up meeting place, and she impulsively—as is her pattern—goes along with it by taking on the identity of the missing woman whom she had met briefly on the train.  Nancy (Bell) has a sister who is bombarding her with pop psychology aphorisms to encourage the socially awkward Nancy out into the marketplace, which may partly account for her decision to go along with the mistake.
Nancy has a quirky personality, coming up with humorous pronouncements that tend to be off-putting, and causing the listener to disappear.  She’s also a bit slapstick and clumsy in getting from one place to another.  Nancy been burned in romance, so is feeling cynical about commitment.  Jack (Simon Pegg), her “date” is just as quirky as she is and doesn’t pick up cues that he has met up with the wrong woman.  They end up having a screwball good time fueled by alcohol, though, until she bumps into an old boyfriend, Sean (Rory Kinnear), whose torch still burns for her.  When he discovers what she has done, he threatens to out her unless she does him some favors.
As an added complication to the plot, Nancy is supposed give the key toast at her parents’ 40th wedding anniversary, but typical of her, this gets put on the back burner, making it questionable whether she will let her family down or not.
If one goes for the humor in British comedies, Man Up will be great fun.  It’s a little slapstick, touches on common anxieties of contemporary singles, is chockfull of incongruities, and keeps the viewer invested in the outcome.
Bell, a very talented actress, carries the lead well, although overacting—which may be at the writer’s (Tess Morris) and director’s (Ben Palmer) behest—detracts from a solid performance.  She has adopted a British accent, which is largely successful.  The opening scenes with goofy Bell making faces with a lipstick prop can be hilarious, or over-done, depending on the viewer’s preference.  Pegg bring his considerable comedic skills to bear, and he and Bell sync perfectly when they’re cutting up during the first part of their date.  Likewise, at the resolution of the fiasco, they pull it off beautifully.  Supporting actors (Olivia Williams, Ophelia Lovibond, Henry Lloyd-Hughes, and Rory Kinnear) add depth and interest to the main plot.

For a tasty bite of British humor, this romcom is likely to satisfy.

Posted by donnarcopeland at 2:53 PM