OUR BRAND IS CRISIS 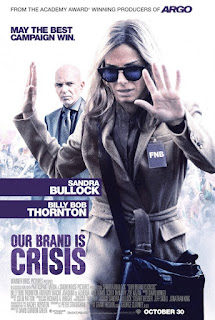 Crisis is the key word here in this picture showing the seamier (realistic?) side of politics.  The setting is Bolivia where a race for president is going on, the screenplay (Peter Straughan) of which is inspired by a documentary (same title) directed by the talented Rachel Boynton (Big Men http://texasartfilm.com/bigmen.html) about a political race for president of Bolivia in 2002.  Candidate Gonzalo Sanchez de Lozado hired an American political firm that consulted all over the world to run his campaign:  Greenberg Carville Shrum.  (That’s Carville, as in James Carville.)  Since I haven’t seen the documentary, I don’t know how much the movie reflects events in that work.
Our Brand is Crisis the movie begins with two political strategists, Nell (Dowd) and Ben (Mackie) driving through the snow to Jane Bodine’s (Bullock) isolated cabin to talk her into joining their team in Bolivia.  Hurt by political machinations in her work as a crack strategist in the past, she has developed new interests and a new life.  Somehow, though, the thrill of a campaign is seductive, and she decides to join them.
Unfortunately, after arriving in Bolivia with altitude sickness and feeling rotten in general, she realizes that her prior nemesis Pat Candy (Thornton) is on the scene.  Bad news.  The movie takes a neutral stance about their past, so it is unclear who actually was responsible for the most heinous dirty tricks in previous campaigns, although, I think they want us to believe that it was Candy, who comes across as slimy as the snake in the Garden of Eden.
The campaign proceeds and the two teams end up going for the jugular.  It is a fascinating (at least to me) look at how political campaign strategists think and reason.  In Jane’s case, she deftly sizes up the psychology of her candidate Castillo (de Almeida) and figures out how to turn his weaknesses into strengths—clearly going against the advice he is currently receiving from his own consultant and the American team.  In view of this perceptive cogency, the filmmakers’ showing her clumsy and neurotic for comic effect was silly and an unnecessary distraction.  They should have dispensed with the “comedy” altogether and gone for dramatic effect and political illumination.
Although we learn how the election turns out, the film ends with an ambiguity that I see as a strength.  Beneath Jane’s many “masks” (alternately crazy, tender, calculating, insightful, and—above all—perceptive), she is a thoughtful and sincere woman with convictions who will continually surprise.
We know Sandra Bullock is a phenomenal actor, and I think she portrayed this character to a T.  Such a talent actor can make the character come alive so forcefully you forget the actor.  She was strongest in this film when Candy is speaking to her in a taunting, seductive, goading manner and she simply stares into space (and you know exactly what she is thinking) or—in contrast—when she forcefully confronts her team or the candidate with hard truths; or at the end when she is mulling over in her mind the comments of the young campaign worker and all that has just transpired.  Billy Bob Thornton is masterful in portraying a truly evil person, all while talking in the most civil and seductive manner.  His idea of coming into the filming looking exactly like James Carville was a brilliant move.
David Gordon Green does the quiet, personally revolutionary films that I am inevitably drawn to (e.g., Prince Avalanche, George Washington).  I imagine he smiles as he thinks about the issues he has brought up in Our Brand is Crisis that will spark controversy and differences of opinion.  In discussions about this film, I expect many will have strong opinions about political consultants, political processes (particularly elections), and the marketing of candidates.

An insightful look at the underside of political campaigns.