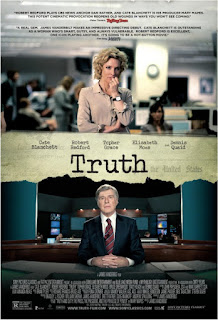 This Truth does need to be told to remind us of the importance of solid investigative journalism at a time when so much news has become infotainment.  The film is based on a book written by its lead character Mary Mapes (Blanchett) entitled Truth and Duty:  The Press, the President, and the Privilege of Power.  It gives Mapes’ account of a story she researched and produced on television’s “60 Minutes”, which questions President Bush’s service in the Air National Guard.  The first half of the film shows the painstaking efforts made by the CBS team to fact check their data to assure its veracity.  They sincerely think they are doing the best job they can as journalists.  Little do they realize the power of those who have competing interests in squashing such a newscast.
The coincidence of the story being aired during a Presidential election turns out to be meaningful.  Needless to say, it creates a firestorm of controversy.  Dan Rather (Redford), CBS’ news anchor reporting the story, is criticized, but nothing like the vitriolic attacks on Mapes, his producer.  Was it at least partly because she was a woman?  She had a reputation for aggressively going after stories, but initially CBS patted her on the back for this.  The film does a good job in showing that some of the things she is criticized for actually make her a good reporter.
But when CBS’ parent company, Viacom, enters the picture and begins to exert a strong arm over CBS—because of a competing interest—the writing is on the wall.  Rather sees it.  He bends to the forces and goes out gracefully.  Rather and Mapes are the best of friends/colleagues, but with very different personalities and backgrounds.  Having been abused by her father and well supported by her husband, she cannot resist a final major defense of the story (against her lawyer’s advice to mollify a committee stacked against her), which is not in her own self-interest.  But that’s a hero for you.
Blanchett is clearly a star in this production—as she is in so many—by capturing the essence of the Mapes figure and empathically rendering it.  Her co-star Redford—while he does not physically resemble the newscaster—easily conveys the essence of Rather.  The actors’ chemistry onscreen is a valid reproduction of the deep connection between Rather and Mapes.
This is a film that will not receive its due primarily for political reasons, I think.  But it is well told even-handedly by writer/director James Vanderbilt (The Amazing Spiderman, 2012, 2014; Zodiac) and the actors.

I am glad this account of Dan Rather’s undoing is being told, although it is a sad story.

Posted by donnarcopeland at 4:00 PM