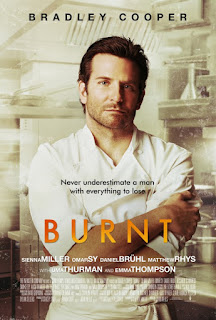 A chef with a sordid past shows up in New Orleans being as obnoxious as he used to be in the kitchen.  However, he has at least shaken the destructive addictions that got him into trouble and has done self prescribed penance by shucking one million oysters.  Now, he is ready to begin again—in London.  When he gets there, Adam Jones (Cooper) gradually meets up with a number of colleagues from the past, but no one is pleased to see him because of the dastardly things he had done to them.    Nevertheless, (the man has grit) he starts to recruit the very people he had wronged.  It won’t be an easy road and he still has things to learn, but his reputation as a chef and his charm (when he turns it on)—and sometimes behind-the-scenes manipulation—will get him the people he wants in a restaurant that needs rescuing.
Burnt is a good title for the film as a metaphor referring to a mistake in the kitchen, to friends and colleagues feeling burnt by Adam, and burning one’s bridges before an exit.  The film is about the ups and downs of getting the restaurant, “Adam Jones at The Langham”, on its feet and Adam’s try for a third Michelin star.  Unfortunately, he yells at his staff, is rude with everyone, and has temper tantrums when things aren’t perfect, running the risk of losing valuable employees.  (This over-the-top violent interaction reminds me of Director John Wells’ August:  Osage County of last year.)  But Adam sees a therapist (Thompson) and tentatively starts a supportive friendship to get his self on a better, less destructive track.
One of the things I find very frustrating in “food” movies is that we don’t really get to look at the gorgeous dishes prepared.  Isn’t that part of the point in seeing a movie about gourmet restaurants?  The editing of this film by Nick Moore is so jerky we never get to admire the artful dishes that someone has slaved over; and the rapid cuts from one scene to the next and zipping back and forth between two characters’ simultaneous actions can have a dizzying effect.  It may be that the filmmakers are interested in showing us what really goes on in high-end restaurants—a lot of yelling and throwing dishes across the room and at people—but I for one can just as well do without that side of reality, if it is indeed a reflection of reality.
Bradley Cooper does bring his acting skills to the character, but the script makes him so repulsive, it’s hard to warm up to him.  Adam does become more insightful and respectful of others across time and lets go of some perfectionism, but watching that much narcissism unleashed for most of the film is tiresome.  The characters played by Sienna Miller and Daniel Brühl provide good counterbalance to Adam’s abrasiveness, and they are well cast.  Likewise, Uma Thurman and Emma Thompson bring extra sparks to their cameos.  Another cameo by Alicia Vikander is perfect as a woman who appears to be mysterious at first, but whose identity is gratifyingly explained.
Somehow, despite all the talent involved in the making of this film, Burnt just doesn’t fill the appetite.

Burnt:  Not a well seared production.

Posted by donnarcopeland at 11:08 AM