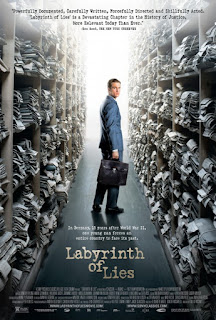 Indeed, Labyrinth of Lies contains a complex labyrinth of denial that the protagonist must cut his way through to get to the heart of the matter in the late 1950’s—that of identifying Nazi Party members who were stationed at Auschwitz during WWII.  Johann Radmann (Fehling) is genuinely committed to The Truth, based to a great extent on his father’s admonition to him before coming up missing in the war.  Johann is young enough not to have heard about the concentration camps in Germany, and has to be brought up to speed, partly on his own because few people want to talk about it.  He is a prosecutor, and when the film opens, is bored out of his mind dealing with traffic tickets.  Thomas Gnielka (Szymanski) is a reporter who makes a scene in a law firm, trying to get it to investigate someone who was an officer at Auschwitz and is now a local schoolteacher. Gnielka and Radmann become friends, which is another way Johann becomes more informed about the war.  Later, when he gets a chance to lead the investigation in ferreting out Auschwitz personnel who are still living, he jumps at it.  Little does he realize that this will involve looking up 8,000 employees of the camp.
Johann is on the pole opposite the deniers and “forgetters” of the Holocaust.  He views the law as dichotomous; either you’re guilty or innocent, and if you’re guilty you must be punished, no matter what the extenuating circumstances are or were.  He goes after identifying and locating the perpetrators with unmatched zeal, heedless of the cautionary advice of those senior to him.  He is so obsessed with the task as he sees it he even shows no mercy to those in his circle whom he loves, when he finds they were members of the Nazi Party.
This well made film from Germany directed by Giulio Ricciarelli and co-written with Elizabeth Bartel, examines the concepts of punishment, forgiveness, and mercy within a system of justice.  Johann has major battles—wins and losses—in arriving at a place where he is at peace.  I presume his journey is meant to signify the one the German people have had to make.  It’s similar as well to Nelson Mandela’s stance in South Africa after he was released from prison.  His message was that forgiveness and reconciliation should take precedence over punishment; it is the victims and their stories that become essential in this paradigm.
Alexander Fehling captures the role of the earnest, naïve, ambitious attorney who has a bit of the save-the-world complex; as he learns more, his expression turns to one of pain, puzzlement and doubt, part of the maturing process.  Gert Voss as his Attorney General is strong as well in his role of trying to supervise his charge while giving him freedom to investigate and use his own ideas.  Other supporting actors, Becht, Szymanski, and Krisch help to make this a fine acting ensemble.  The moving score by Sebastian Pille and Niki Reiser and elegant cinematography of Martin Langer and Roman Osin enhances the quality of this fine production that relates the story of historically important events.

Posted by donnarcopeland at 1:43 PM