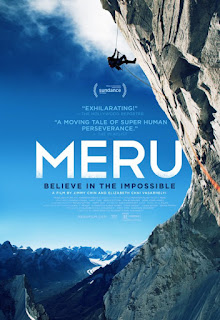 Meru is just as much about humanity as it is about climbing a formidable peak in the Himalayas, and the photography by two of the climbers (Jimmy Chin and Renan Ozturk) is awe- inspiring.  Admirably, the film shows brotherhood at its best as well as heroism and brawn.  It opens with a stark scene of a tent clinging to the side of a frosted cliff.  Inside are climbers, some asleep, some awake, listening to a morning toll.  Outside are sheer cliffs covered with ice and the starry blue sky in the background.  We’re a part of a major climb, with Jon Krakauer, a seasoned climber, as guide and commentator; he was a member of an earlier attempt to climb Mount Everest
The climbers are Conrad Anker, Jimmy Chin and Renan Oztark.  Conrad had Alex Lowe, a legendary climber killed in an avalanche, as his mentor.  Ever since, he is bound and determined to scale Shark’s Fin in Meru, a summit Krakauer describes as the center of the universe where heaven and hell come together.  It’s a 1,500-foot blade of granite 15,000 feet high.  Conrad and Jimmy had made a previous attempt that failed.
Anker, Chin, and Oztark will attempt the climb carrying their own gear (200 pound loads)  without the help of sherpas.  When a storm comes in, they have to stay in a tent fastened to a cliff for four days, which depletes their food supply.  Jimmy and Renan assume that when they get out, they’ll be going back down.  But no, Conrad insists on going on up.
However, later, when Renan suffers frostbite and trench foot and they have no food, the trio is forced to turn around.  Three years pass, and Conrad and Jimmy are continuing to plan for another attempt at Meru.  Renan wants to go too, but then he has a ski accident and sustains a severe head injury.  Nevertheless, he still wants to go, and the other two have to make a decision about whether to include him.  It will make it riskier for Conrad and Jimmy, as well as Renan.  The last half of the story is about that journey and whether or not they succeed.
Meru is a well-made documentary that sheds light on the kind of people who have burning aspirations to scale great heights, including their backgrounds, which also helps explain who they are and how they came to be.  As much as I admire and appreciate the nobility of their efforts, I have to acknowledge that I don’t really understand the passion for climbing.  Still, I could enjoy it vicariously by watching the film and getting to know these players and the sense of brotherhood that seems to be characteristic of serious mountain climbers.
Meru is in limited release, but is coming out on DVD, Blu-ray, and VOD this November (2015).

Posted by donnarcopeland at 12:31 PM