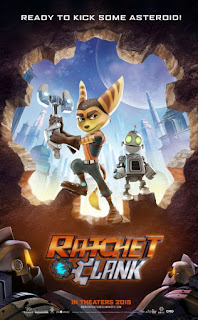 Ratchet and Clank are two entertaining characters in this beautifully animated movie based on a videogame—not usually one of my favorite activities.  But this one has some good messages for children having to do with loyalty, hubris, and ambition.  Betrayal, vainglorious boasting, and impulsivity are boldly displayed and then shown to be mistakes, and it becomes clear how one becomes a true hero.
Ratchet (Taylor) is the only one of his kind (his planet was destroyed and he is the only survivor), called a “lombax”, and embodies classic ADHD qualities—attention deficit and impulsivity.  He is brave, and despite his small size, longs to be a ranger like Quark (Ward), captain of the Galactic Rangers.  Ratchet shows that sometimes it’s possible to achieve great feats with enough grit and determination, but other times it is simply risky behavior.  He’s a good model for children with ADHD, because he pulls it all together in the end.
Suddenly, Clank (Kaye), a robot, appears in Ratchet’s world, and the two become a working pair, realizing that there is a dangerous weapon set up and already in motion to destroy whole planets.  This “Planet Destroyer” is commanded by Drek (Diamatti), and is the brainchild of Dr. Nefarious (Shimeman).
The games about Ratchet and Clank are known for the fancy, exotic weapons, which are explained in detail and demonstrated in rapid succession in the movie, including the one that pixilates a man into a sheep.  Viewers fascinated with weapons will be caught up in the excitement of them.
The story is a familiar one about evil men with inordinate greed and lust for power and control.  Here, it’s taken to a galactic level, with some coming off as surprising heroes and some being brought to their knees.  In the process, some learn a valuable lesson:  “To be a hero you don’t have to do big things; just the right ones.”
The graphic animation and CGI effects are colorful and impressive, and the voices of Taylor, Kaye are excellently rendered; those of Giamatti, Goodman, and Stallone—whose voices are usually highly recognizable—are disguised enough to make them sound different from their usual.
I would think the film is not for very young children, although those who play videogames may easily follow it.  Most likely children ten+ years will enjoy it.  Save your money; the extra for 3-D is probably not worth it.
Surprisingly good entertainment based on a videogame.
Grade:  B                              By Donna R. Copeland