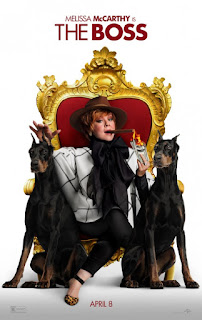 The Boss is typical Melissa McCarthy fare (Bridesmaids, This is 40, Identity Thief, Tammy), and if you like those films, you will like this one.  I see her role in Spy (written and directed by Paul Feig) as one that shows her more serious acting abilities, and the direction I wish she would go in her career.  McCarthy has considerable acting talent, and I think it’s time for her to part with the slapstick persona she is known for and get serious.  She is one of those interesting women who are heavy, but beautiful and talented.  The reason I liked Spy so much is that Feig showed a blended, more complex character, with smarts overriding klutz.
The story in this film is that Michelle Darnell (McCarthy) is a highly successful businesswoman who grew up as a foster child—one that was returned surreptitiously to the orphanage numerous times—and now has a chip on her shoulder and determined to “make it”, no matter the cost.  And she does, but along the way she allies with “Renault” (Dinklage), her “twin” in business practices (win, whatever it takes) and sometimes lover.
When he feels betrayed by her, he gets her charged with inside trading (the reference to Martha Stewart is explicit), and while she is in prison sees that her company goes bankrupt.  When she is released from prison, she has to completely start over, and relies on her previous assistant Claire (Bell)—whom she treated very badly—to reenter society.
This story is very much about sociopathy—essentially using other people (in the negative sense of the word) for one’s own narcissistic needs.  So Michelle blithely barges in on Claire and her daughter, co-opts the child’s Girl Scout cookie project to form a competing organization, all in the guise of being more generous to children than the Girl Scouts.  But Michelle’s rival, Renault (Ron, really, since he is from Brooklyn) is still seething and out to get her again.
I won’t tell you how this turns out because I don’t need to; I’m sure you’ve already guessed.  But if you enjoy these kinds of comedies, then it will be to your taste.
I object to this kind of movie on a number of fronts.  First, it wastes so much talent (the cast is truly fine in every respect) on a story with so much potential for substance.  Second, it models really bad behaviors too numerous to list and treats them as comedic material.  Do we really want to laugh at corporate misconduct, exploitation of employees and children, and physical altercations (note that when men fight, it is admired or at least exhilarating; when women do it, it’s comedic or even sexually titillating for some).  Well, despite the considerable talent—and the obvious enjoyment by many in the screening audience—I have to give this film a thumbs-down.

Typical Melissa McCarthy fare, in which bad business practices are presented as comedy by a very talented cast.