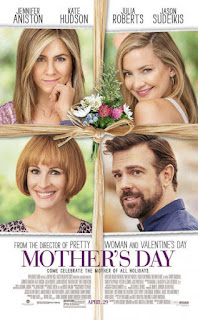 Mother’s Day is for people who like sitcoms, and this will be a treat for them because it extends for two hours.  Sitcoms are noted for their canned laughter tracks, but this film has a script that is canned.  Pick any incident/joke/situation in sitcoms, and it is plugged in here somewhere, pulling your heartstrings one moment, making you laugh at another, pulling for worries and tears at still another, and on and on.  When a character goes to a vending machine for candy, it reminded me of how the filmmakers seemed to have gone to a machine for script scenes and pushed just about every button.
We see a newly divorced couple where the ex-husband has taken a younger, more attractive wife, a successful career woman who has yet to experience the ultimate satisfaction of motherhood (but at least she’s not the stereotypical b----), a mixed race marriage, an adopted child as an adult looking for her mother (she can’t commit to a relationship until she finds her), and a Lesbian couple.  They all run into the usual problems—clearly of their own making—develop insight, make discoveries, and all of it is wrapped up into a tidy bow at the end.
On the more positive side, the actors’ skills in their art/craft are readily apparent.  Foremost is Julia Roberts (Miranda) as the charming, attractive product pusher on television.  She is Pretty Woman become wiser and more sophisticated.  (As an aside, Garry Marshall directed that and this picture.)  Britt Robertson (Kristin) is captivating in her portrayal of complex emotions and ambivalence.  Jason Sudeikis (Bradley) and Timothy Olyphant (Henry) are convincing as men at sea, feeling out of control in life.  Jennifer Anniston (Sandy) and Kate Hudson (Jesse) have been well schooled to expertise in their roles.  Margo Martindale (Flo) always meshes hand-in-glove with mothers of a certain type (although she is not by any means restricted in her range, e.g., on television’s “The Americans”, in which she plays a Russian spy.  Other supporting characters’ performances are exemplary, which may speak to Marshall’s direction and to Gail Goldberg’s and Barbara J. McCarthy’s casting.
I have no idea what the premise is of Mother’s Day—it’s certainly not a weighty message.  I think that to some extent, it is Hollywood producers’ fantasy that somehow life bumps along, and everybody gains insight and a good heart and it will all turn out in the end.  Mothers will be tolerant and forgiving, divorcees will pull together putting the past behind them and becoming loving friends, and above all, mothers and children will be reunited lovingly.
So spake Zarathrustra.  Not.  Alas for this script, Zarathrustra observed that to plunge the depths of the world, creativity is required; a “recipe” as presented here is not sufficient.

A collection of stories that may or may not ring true.