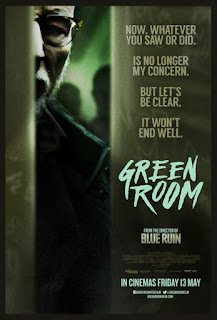 In Green Room, you get to follow five members of a punk rock band (The Ain’t Rights) across the country trying to land a gig wherever they can.  Resources are scant, they sleep on the bus if need be, and they may have to siphon off gas from cars in parking lots for fuel.  We first see them play to an almost empty house for just a few bucks, so in desperation, when they get a tip for a club in Portland, Oregon, they head for it.
They’re greeted and play a set just 20 minutes after they arrive, and the audience, initially cold, warms up to them.  (Pay attention to the appearances of those attending; it will give you a clue as to what’s in store.)  After they perform, the band is shown to a room where they can relax and prepare for the next set, but…they come across a body on the floor with a knife sticking out of her head, her  hysterical blonde Amber (Poots) who seems to be familiar with the club, and a huge man with a gun who locks the door.
At first, band members have no idea what is going on, but they are sharp, and quickly realize that they need to take steps to protect themselves and wait for the police to arrive.  Part of the horror of the film is our being shown what is going on outside the room and outside their awareness while they wait.  The room becomes significant, because during the course of the story, it becomes a safe harbor.  “Green Room” has a number of connotations.
What we are shown outside is Darcy Banker (Stewart), the owner of the club, and his extensive operation.  The plot thickens when we learn the nature of his business, what he wants from the band, and their intuitive sense that they are in sinister circumstances.
This is an extremely violent film with multiple grisly murders.  Horror movie fans will find much to their liking, but others should think twice before attending.  Fortunately for my ears, there are only brief intervals with The Ain’t Rights’ screeching music with unintelligible words.
Green Room is being praised as the feature following Jeremy Saulnier’s well-received previous film, Blue Ruin.  It is high on suspense, and some of the actors and their characters spark interest.  Foremost, of course, is Patrick Stewart in a completely new role as the club owner, a white supremacist named Darcy.  He’s as creepy as they come with his oh-so-reasonable attempts to persuade the band to come out of the Green Room.  Also impressive is Imogene Poots as a seemingly quirky dumb blonde who turns out to be not only cool and calm, but sharp and skilled as well.  She drew laughs more than once with her deadpan utterances.  Macon Blair, the star of Blue Ruin, is perfect as Darcy’s reluctant assistant, the only character among the thugs that seems to have a conscience.

There is suspense, blood, and gore aplenty in this newly released horror film.

Posted by donnarcopeland at 10:26 AM