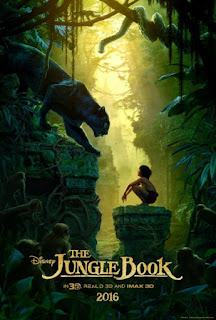 This is a beautiful production for children that adults will enjoy just as much.  The Jungle Book is based on Rudyard Kipling’s book of the same title (screenplay by Justin Marks.)  It is truly a work of art in its portrayal of sound principles and its visual manifestation in production design (Christopher Glass, Abhijeet Mazumder) and cinematography (Bill Pope); in music (John Debney); and in the phenomenal acting by young Neel Sethi as Mogli supported by a stunning cast of voices.  After starting out as an actor, Jon Favreau seems to have come into his own in directing (previous features include Chef, Cowboys and Aliens, and two Iron Man films), as here he is spot-on.
There have been numerous productions through the years of the Kipling Jungle Book stories (including other Disney films and books), but this is probably the most successful by virtue of the talented filmmakers and new technology.  Mowgli sprinting through the jungle on his bare feet, shimmying up tall trees, and hanging precariously from brittle limbs and sheer cliffs should impress everyone.
One of the most important contributions of the film is the crux of the story, which demonstrates over and over again the necessity for cooperation among all living things.  Humans are shown to be destructive in our many uses of fire, but we’re at the top of the chain in our creativity and resourcefulness.  Nevertheless, when we ignore the essentialness and value of the other components of our universe (e.g., animals, plants, air, water), we risk our own destruction.  Mowgli serves as a model for us to follow; he makes friends everywhere he goes (except for one glaring example who refused to cooperate), primarily through his contributions to others and the common good and promoting cooperation in general.
There is one feature about Jungle Book that warrants explanation.  Part of Mowgli’s success with others is his use of tools to help him solve problems.  While this shows human creativity that separates us from animals, it’s hard to imagine how Mowgli could have learned these, having been brought up by wolves.
Some of the conflicts in this film are fierce and bloody, and I wondered if smaller children would get too frightened.  However, I heard no cries from any of the young children in the screening I attended, but parents with children who are sensitive to violence (even in the jungle) may want to wait until they are older to show them this film.
To everyone else, I say, “GO”, for a thrilling, fun, quality time in the theater.

Disney scores a hit with The Jungle Book.

Posted by donnarcopeland at 11:23 AM