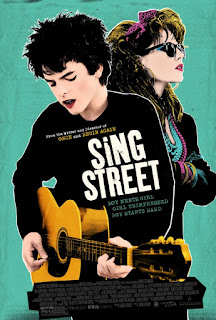 Sing Street will make you laugh and keep you entranced, but with melancholic shifts, bits of horror, and wincing at the nitty-gritty of long-term relationships.  Semi-autobiographical by the writer/director/producer John Carney (Once, Begin Again), it tells the story of a teenager trying to find his identity and make his way in life despite numerous obstacles.  His parents quarrel frequently, his mother is depressed, as is his older brother, and the father is going through hard times financially.  For that reason, he takes his younger son out of an expensive school and enrolls him in public school.  Conor (Walsh-Peelo) is bullied at his new school, not only by a punk, but also by the head of school, Brother Baxter.
Serendipitously, a friend with ambition appears, giving advice about how to deal with a bully, and when he finds out Conor likes music and sings, he has the idea that the two of them should form a band.  They recruit successfully, and give themselves the name Sing Street.  Conor’s bossy older brother Brendan (Reynor) coaches him by critiquing the band and giving helpful advice like developing their own sound and making videos.  He can be pompous at times, and revels in his pop-psychology pronouncements (He has a picture of Freud on his wall.), but Conor is oblivious to the bluster, and takes Brendan’s advice on his own terms.  We get it; music will be his salvation.
Much of the charm of this delightful film is the apparent happenstance that occurs over and over again.  For instance, Conor gazes across the street one day and sees a beautiful brunette (Boynton) sitting on the front steps.  He develops an instant crush, goes to talk to her, and when he finds out she is a model, he asks her to be in his video.  She is one year older than he is—and much more experienced—but is charmed by his sincerity and creativity, and decides his name should be ‘Cosmo’, a more suitable name for someone in a band.  She agrees to be in the video, and when she arrives at the shoot, she is not only a hit visually, but knows something about staging and costumes, which the band needs.  (This is all the encouragement Conor needs to experiment with different “looks”, which he borrows liberally from the rock music LP covers that his brother lends him.)
The rest of the story charts the ups and downs of the band, the romance between Cosmo and Raphina, the gradual dissolution of Conor’s family, and Brendan’s confessions of how he sees himself vis a vis his brother.  Sing Street has a victorious concert towards the end when Cosmo roasts Brother Baxter with:  “You wear a dress and tell me not to wear brown shoes.”  Carney is a master at writing script; there are sage pronouncements sprinkled throughout the movie.
Carney was interested in casting unknown actors, so much of the cast is just that, except for Aiden Gillen (Game of Thrones, Calvary), Maria Doyle Kennedy (Jupiter Ascending, 1,000 Times Goodnight, Downton Abbey), and Jack Reynor (Macbeth, Doll House).  But Walsh-Peelo especially shows a great deal of talent in acting and singing, and his buddies in the band (Ben Carolan, Mark McKenna, Percy Chamburuka, Conor Hamilton, Ian Kenny, and Karl Rice) are firm back-ups.  The 1980’s music is nostalgic (Duran Duran, The Cure, The Jam, Hall & Oates), and Carney composed eight numbers with Gary Clark that mesh nicely with the better-known works.
How the formation of a band solves numerous adolescent challenges.
Grade:  A                                  By Donna R. Copeland