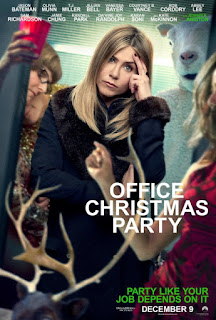 This is a movie for people who like silliness and absurdity, who think heavy drinking, drugs and major destruction are funny—and there were certainly those present at the screening I attended.  The more outrageous the comment or behavior, the more they laughed.  So if this is your cup of tea, the way you relax during a stressful time of the year, then Office Christmas Party is for you.
The father of Carol (Anniston) and Clay (Miller) left them his successful IT company, and Carol, Miss Goody-Two-Shoes in the family, runs it with an iron fist (no velvet glove).  Her biggest irritant is her brother Clay who was always favored by their father, despite his messing up and his sister being the much high achiever.  The situation right before Christmas is that Carol intends to lay off 40% of the employees in Clay’s branch because although they earned a profit, it wasn’t high enough for Carol.  And above all there would be no Christmas party and no end-of-year bonuses.
Leave it to Hollywood to solve the problem with the biggest party blowout ever, one that will host a major athlete, as well as a potential billionaire partner.  Of course, it won’t go smoothly, and most of the story chronicles the mayhem and havoc that will ensue, ending up with the, nowadays required, car chase.  You will guess ahead of time how it will all turn out.
The movie is so formulaic, not only will the viewer be able to figure out the conclusion, but from moment to moment, he/she will be able to anticipate what will happen next, given a stereotypical set-up.  The major flaw in the film is the script from six(!) writers drawn from who knows how many previous movies.  The direction (Josh Gordon and Will Speck), music (Theodore Shapiro), cinematography (Jeff Cutter), and acting are of reasonable quality; it’s just that with a story this lame and without any creativity whatsoever the whole show is doomed.
If there is any weight to this picture at all, it is in its depiction of sibling rivalry and how parents might script out their children’s lives unfairly.  Unfortunately, the siblings are shown to be so one-dimensional, they become caricatures, and while change takes place, it’s not plausible from what came before.

This is a Christmas party you probably won’t want to go to.